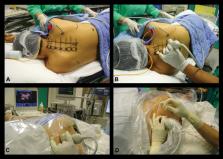 Twenty-five female patients undergoing PBCS received an USG 6m-TPVB for surgical anesthesia. Four milliliters of ropivacaine 0.5% (with epinephrine 1:200,000) was injected at each vertebral level. Dexmedetomidine infusion (0.1–0.5 µg.kg −1.h −1) was used for conscious sedation. Success of the block, for surgical anesthesia, was defined as being able to complete the PBCS without having to resort to rescue analgesia or convert to GA.

The USG 6m-TPVB was successfully performed on all 25 patients but it was effective as the sole anesthetic in only 20% (5/25) of patients. The remaining 80% (20/25) reported pain during separation of the breast from the pectoralis major muscle and its fascia. Surgery was successfully completed using small doses of intravenous ketamine (mean total dose, 38.0±20.5 mg) as supplementary analgesia.

USG 6m-TPVB is technically feasible but does not consistently provide complete surgical anesthesia for PBCS that involves surgical dissection on the pectoralis major muscle and its fascia. Our data suggest that the pectoral nerves, which are not affected by a 6m-TPVB, are involved with afferent nociception.

P-A Lönnqvist,  Zeina Z. Naja (2001)
The failure rate and complications following thoracic and lumbar paravertebral blocks performed in 620 adults and 42 children were recorded. The technique failure rate in adults was 6.1%. No failures occurred in children. The complications recorded were: inadvertent vascular puncture (6.8%); hypotension (4.0%); haematoma (2.4%); pain at site of skin puncture (1.3%); signs of epidural or intrathecal spread (1.0%); pleural puncture (0.8%); pneumothorax (0.5%). No complications were noted in the children. The use of a bilateral paravertebral technique was found approximately to double the likelihood of inadvertent vascular puncture (9% vs. 5%) and to cause an eight-fold increase in pleural puncture and pneumothorax (3% vs. 0.4%), when compared with unilateral blocks. The incidence of other complications was similar between bilateral and unilateral blocks.

Glenn Woodworth,  Ryan Ivie,  Sylvia M Nelson … (2017)
Breast surgery is exceedingly common and may result in significant acute as well as chronic pain. Numerous options exist for the control of perioperative breast pain, including several newly described regional anesthesia techniques, but anesthesiologists have an insufficient understanding of the anatomy of the breast, the anatomic structures disrupted by the various breast surgeries, and the theoretical and experimental evidence supporting the use of the various analgesic options. In this article, we review the anatomy of the breast, common breast surgeries and their potential anatomic sources of pain, and analgesic techniques for managing perioperative pain. We performed a systematic review of the evidence for these analgesic techniques, including intercostal block, epidural administration, paravertebral block, brachial plexus block, and novel peripheral nerve blocks.