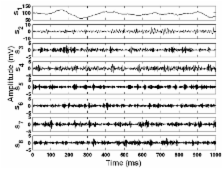 Wireless sensor networks (WSNs) are autonomous networks that have been frequently deployed to collaboratively perform target localization and classification tasks. Their autonomous and collaborative features resemble the characteristics of agents. Such similarities inspire the development of heterogeneous agent architecture for WSN in this paper. The proposed agent architecture views WSN as multi-agent systems and mobile agents are employed to reduce in-network communication. According to the architecture, an energy based acoustic localization algorithm is proposed. In localization, estimate of target location is obtained by steepest descent search. The search algorithm adapts to measurement environments by dynamically adjusting its termination condition. With the agent architecture, target classification is accomplished by distributed support vector machine (SVM). Mobile agents are employed for feature extraction and distributed SVM learning to reduce communication load. Desirable learning performance is guaranteed by combining support vectors and convex hull vectors. Fusion algorithms are designed to merge SVM classification decisions made from various modalities. Real world experiments with MICAz sensor nodes are conducted for vehicle localization and classification. Experimental results show the proposed agent architecture remarkably facilitates WSN designs and algorithm implementation. The localization and classification algorithms also prove to be accurate and energy efficient.

The Nature of Statistical Learning Theory

An Improved Particle Filter for Target Tracking in Sensor Systems

Ying-Xue Wang,  Sheng-xiang Wang,  Jun-Jie Ma (2007)
Sensor systems are not always equipped with the ability to track targets. Sudden maneuvers of a target can have a great impact on the sensor system, which will increase the miss rate and rate of false target detection. The use of the generic particle filter (PF) algorithm is well known for target tracking, but it can not overcome the degeneracy of particles and cumulation of estimation errors. In this paper, we propose an improved PF algorithm called PF-RBF. This algorithm uses the radial-basis function network (RBFN) in the sampling step for dynamically constructing the process model from observations and updating the value of each particle. With the RBFN sampling step, PF-RBF can give an accurate proposal distribution and maintain the convergence of a sensor system. Simulation results verify that PF-RBF performs better than the Unscented Kalman Filter (UKF), PF and Unscented Particle Filter (UPF) in both robustness and accuracy whether the observation model used for the sensor system is linear or nonlinear. Moreover, the intrinsic property of PF-RBF determines that, when the particle number exceeds a certain amount, the execution time of PF-RBF is less than UPF. This makes PF-RBF a better candidate for the sensor systems which need many particles for target tracking.

[* ] Author to whom correspondence should be addressed; E-mail: wangxue@ 123456mail.tsinghua.edu.cn

Reproduction is permitted for noncommercial purposes.