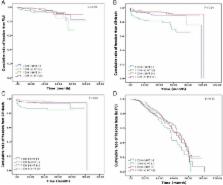 Percutaneous coronary intervention (PCI) is a necessary procedure commonly performed for patients with coronary artery disease (CAD). However, the impact of diabetes and hypertension on long-term outcomes of patients after receiving PCI has not yet been determined.

Prevalence and predictors of culprit plaque rupture at OCT in patients with coronary artery disease: a meta-analysis.

Outcomes in patients with diabetes mellitus undergoing percutaneous coronary intervention in the current era: a report from the Prevention of REStenosis with Tranilast and its Outcomes (PRESTO) trial.

Colette R. Thomas,  Bernard Gersh,  Verghese Mathew … (2004)
Diabetes portends an adverse prognosis in patients undergoing percutaneous coronary intervention (PCI). Whether improvements in current clinical practice (stents, IIb/IIIa antagonists) have resulted in substantial improvement of these outcomes remains an issue. The aim of this study was to determine the influence of diabetes on 9-month outcomes of patients undergoing PCI in the current era. The 11 482 patients enrolled in the Prevention of REStenosis with Tranilast and its Outcomes (PRESTO) Trial were stratified according to the presence (n=2694) or absence (n=8798) of diabetes. Diabetic patients were older; were more likely to be female; had a higher proportion of congestive failure, hypertension, prior CABG, and unstable angina; and had higher body mass index and lower ejection fraction than nondiabetic patients (P<0.01 for all comparisons). The degree of multivessel disease was similar between the two groups. American College of Cardiology/American Heart Association type C lesions were more common in diabetic patients (17% versus 15%, P<0.01). Angiographic and procedural success rates and in-hospital events were similar between the two groups. The primary end point of death, myocardial infarction, or target vessel revascularization (TVR) was analyzed as time-to-first event within 9 months of the index PCI. After adjusting for certain baseline characteristics, diabetes was independently associated with death at 9 months (relative risk [RR], 1.87; 95% CI, 1.31 to 2.68, P<0.01) and with an increased likelihood of TVR (RR, 1.27; 95% CI, 1.14 to 1.42, P<0.01), as well as the composite end point of death/myocardial infarction/TVR (RR, 1.26; 95% CI, 1.13 to 1.40, P<0.01). Despite advances in interventional techniques, diabetes remains a significant independent predictor of adverse events in the intermediate term after PCI.