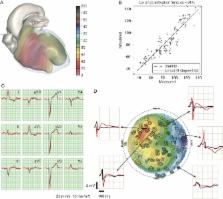 Left-ventricular (LV) conduction disturbances are common in heart-failure patients and a left bundle-branch block (LBBB) electrocardiogram (ECG) type is often seen. The precise cause of this pattern is uncertain and is probably variable between patients, ranging from proximal interruption of the left bundle branch to diffuse distal conduction disease in the working myocardium. Using realistic numerical simulation methods and patient-tailored model anatomies, we investigated different hypotheses to explain the observed activation order on the LV endocardium, electrogram morphologies, and ECG features in two patients with heart failure and LBBB ECG.

Ventricular electrical activity was simulated using reaction–diffusion models with patient-specific anatomies. From the simulated action potentials, ECGs and cardiac electrograms were computed by solving the bidomain equation. Model parameters such as earliest activation sites, tissue conductivity, and densities of ionic currents were tuned to reproduce the measured signals. Electrocardiogram morphology and activation order could be matched simultaneously. Local electrograms matched well at some sites, but overall the measured waveforms had deeper S-waves than the simulated waveforms.

Tuning a reaction–diffusion model of the human heart to reproduce measured ECGs and electrograms is feasible and may provide insights in individual disease characteristics that cannot be obtained by other means.

Jan Christoph Geller,  Cecilia Fantoni,  Helmut Klein … (2004)
Conventional activation mapping in the dilated human left ventricle (LV) with left bundle-branch block (LBBB) morphology is incomplete given the limited number of recording sites that may be collected in a reasonable time and given the lack of precision in marking specific anatomic locations. We studied LV activation sequences in 24 patients with heart failure and LBBB QRS morphology with simultaneous application of 3D contact and noncontact mapping during intrinsic rhythm and asynchronous pacing. Approximately one third of the patients with typical LBBB QRS morphology had normal transseptal activation time and a slightly prolonged or near-normal LV endocardial activation time. A "U-shaped" activation wave front was present in 23 patients because of a line of block that was located anteriorly (n=12), laterally (n=8), and inferiorly (n=3). Patients with a lateral line of block had significantly shorter QRS (P<0.003) and transseptal durations (P<0.001) and a longer distance from the LV breakthrough site to line of block (P<0.03). Functional behavior of the line of block was demonstrated by a change in its location during asynchronous ventricular pacing at different sites and cycle lengths. A U-shaped conduction pattern is imposed on the LV activation sequence by a transmural functional line of block located between the LV septum and the lateral wall with a prolonged activation time. Assessment of functional block is facilitated by noncontact mapping, which may be useful for identifying and targeting specific locations that are optimal for successful cardiac resynchronization therapy.

David Strauss,  Ronald Selvester,  Galen Wagner (2011)
Cardiac resynchronization therapy (CRT) has emerged as an attractive intervention to improve left ventricular mechanical function by changing the sequence of electrical activation. Unfortunately, many patients receiving CRT do not benefit but are subjected to device complications and costs. Thus, there is a need for better selection criteria. Current criteria for CRT eligibility include a QRS duration ≥ 120 ms. However, QRS morphology is not considered, although it can indicate the cause of delayed conduction. Recent studies have suggested that only patients with left bundle branch block (LBBB) benefit from CRT, and not patients with right bundle branch block or nonspecific intraventricular conduction delay. The authors review the pathophysiologic and clinical evidence supporting why only patients with complete LBBB benefit from CRT. Furthermore, they review how the threshold of 120 ms to define LBBB was derived subjectively at a time when criteria for LBBB and right bundle branch block were mistakenly reversed. Three key studies over the past 65 years have suggested that 1/3 of patients diagnosed with LBBB by conventional electrocardiographic criteria may not have true complete LBBB, but likely have a combination of left ventricular hypertrophy and left anterior fascicular block. On the basis of additional insights from computer simulations, the investigators propose stricter criteria for complete LBBB that include a QRS duration ≥ 140 ms for men and ≥ 130 ms for women, along with mid-QRS notching or slurring in ≥ 2 contiguous leads. Further studies are needed to reinvestigate the electrocardiographic criteria for complete LBBB and the implications of these criteria for selecting patients for CRT. Published by Elsevier Inc.

S. Kääb,  B O'Rourke,  Edwin Pak … (1996)
Membrane current abnormalities have been described in human heart failure. To determine whether similar current changes are observed in a large animal model of heart failure, we studied dogs with pacing-induced cardiomyopathy. Myocytes isolated from the midmyocardium of 13 dogs with heart failure induced by 3 to 4 weeks of rapid ventricular pacing and from 16 nonpaced control dogs did not differ in cell surface area or resting membrane potential. Nevertheless, action potential duration (APD) was significantly prolonged in myocytes isolated from failing ventricles (APD at 90% repolarization, 1097 +/- 73 milliseconds [failing hearts, n = 30] versus 842 +/- 56 milliseconds [control hearts, n = 25]; P < .05), and the prominent repolarizing notch in phase 1 was dramatically attenuated. Basal L-type Ca2+ current and whole-cell Na+ current did not differ in cells from failing and from control hearts, but significant differences in K+ currents were observed. The density of the inward rectifier K+ current (IKl) was reduced in cells from failing hearts at test potentials below -90 mV (at -150 mV, -19.1 +/- 2.2 pA/pF [failing hearts, n = 18] versus -32.2 +/- 5.1 pA/pF [control hearts, n = 15]; P < .05). The small outward current component of IKl was also reduced in cells from failing hearts (at -60 mV, 1.7 +/- 0.2 pA/pF [failing hearts] versus 2.5 +/- 0.2 pA/pF [control hearts]; P < .05). The peak of the Ca(2+)-independent transient outward current (Ito) was dramatically reduced in myocytes isolated from failing hearts compared with nonfailing control hearts (at +80 mV, 7.0 +/- 0.9 pA/pF [failing hearts, n = 20] versus 20.4 +/- 3.2 pA/pF [control hearts, n = 15]; P < .001), while the steady state component was unchanged. There were no significant differences in Ito kinetics or single-channel conductance. A reduction in the number of functional Ito channels was demonstrated by nonstationary fluctuation analysis (0.4 +/- 0.03 channels per square micrometer [failing hearts, n = 5] versus 1.2 +/- 0.1 channels per square micrometer [control hearts, n = 3]; P < .001). Pharmacological reduction of Ito by 4-aminopyridine in control myocytes decreased the notch amplitude and prolonged the APD. Current clamp-release experiments in which current was injected for 8 milliseconds to reproduce the notch sufficed to shorten the APD significantly in cells from failing hearts. These data support the hypothesis that downregulation of Ito in pacing-induced heart failure is at least partially responsible for the action potential prolongation. Because the repolarization abnormalities mimic those in cells isolated from failing human ventricular myocardium, canine pacing-induced cardiomyopathy may provide insights into the development of repolarization abnormalities and the mechanisms of sudden death in patients with heart failure.