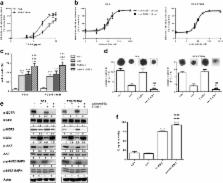 Osimertinib is a third-generation EGFR-TKI with a high selective potency against T790M-mutant NSCLC patients. Considering that osimertinib can lead to enhanced HER-2 expression on cell surface and HER-2 overexpression is a mechanism of resistance to osimertinib, this study was addressed to investigate the potential of combining osimertinib with trastuzumab emtansine (T-DM1) in order to improve the efficacy of osimertinib and delay or overcome resistance in NSCLC cell lines with EGFR activating mutation and with T790M mutation or HER-2 amplification.

T-DM1 exerted an additive effect when combined with osimertinib in terms of inhibition of cell proliferation, cell death and ADCC induction in PC9, PC9-T790M and H1975 cell lines. Combining osimertinib and T-DM1 using different schedules in long-term growth experiments revealed that the appearance of osimertinib-resistance was prevented in PC9-T790M and delayed in H1975 cells when the two drugs were given together. By contrast, when osimertinib was followed by T-DM1 an antagonistic effect was observed on cell proliferation, cell death and resistance acquisition. In xenograft models, we demonstrated that HER-2 amplification was associated with osimertinib-resistance and that T-DM1 co-administration is a potential strategy to overcome this resistance.

Our data suggest that concomitant treatment with osimertinib and T-DM1 may be a promising therapeutic strategy for EGFR-mutant NSCLC.

Targeting HER2 in the treatment of non-small cell lung cancer.

Nataliya Mar,  James J Vredenburgh,  Jeffrey S Wasser (2015)
Oncogenic driver mutations have emerged as major treatment targets for molecular therapies in a variety of cancers. HER2 positivity has been well-studied in breast cancer, but its importance is still being explored in non-small cell lung cancer (NSCLC). Laboratory methods for assessment of HER2 positivity in NSCLC include immunohistochemistry (IHC) for protein overexpression, fluorescent in situ hybridization (FISH) for gene amplification, and next generation sequencing (NGS) for gene mutations. The prognostic and predictive significance of these tests remain to be validated, with an emerging association between HER2 gene mutations and response to HER2 targeted therapies. Despite the assay used to determine the HER2 status of lung tumors, all patients with advanced HER2 positive lung adenocarcinoma should be evaluated for treatment with targeted agents. Several clinical approaches for inclusion of these drugs into patient treatment plans exist, but there is no defined algorithm specific to NSCLC.

Transformation to small-cell carcinoma as an acquired resistance mechanism to AZD9291: A case report