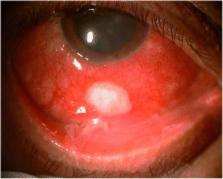 A 57-year-old diabetic Asian (Indian) who was on highly active antiretroviral therapy for the last 10 years presented with 2 weeks’ history of redness in his right eye. Examination revealed localised scleral inflammation with central ulceration in the inferior quadrant of the right eye. Initially, the ulcer scrapings revealed no microbial organism. Progression of ulcer although on empirical antibiotic therapy required repeat scrapings which showed Candida albicans species in culture sensitive to amphotericin and natamycin. Aggressive topical and systemic antifungals resulted in dramatic and complete healing of the ulcer in 3 weeks. Vision was well maintained at 20/30 throughout the treatment course, and the fundus remained normal.

This is the first ever case of fungal scleral abscess in a HIV patient to be reported emphasizing there is a need for high vigilance to suspect an infective aetiology of scleritis in patients with immunocompromised status. Prompt microbial assessment and appropriate antifungals can decrease morbidity in these unusual but serious cases as illustrated in this case.

David Tsai,  S. Lin,  Patrick Shih (1997)
To report the special clinical manifestations and determine the appropriate management of infectious scleral ulceration. A retrospective study was performed on 30 eyes with infectious scleral ulceration. Information was recorded on patients' age, onset and course of disease, pathogenic organism, clinical presentations, methods of diagnosis, treatment, and outcome. 10 cases (33.3%) were accompanied by corneal involvement. Subconjunctival abscess was noted in 16 cases (53.3%). 17 cases (56.7%) gave positive results of pathogen culture and all were Pseudomonas aeruginosa. Two cases had combined bacterial infections and one case was complicated by fungal infection. A total of 26 cases had surgical debridement in this series. Extensive involvement of the sclera with the presence of a 'tunnel lesion' or a 'satellite subconjunctival abscess' were found during debridement. All of the eyeballs involved were salvaged except one. The results of this study were contrary to the poor prognosis presented in previous reports. Early and repetitive surgical debridement is believed to be mandatory in the intractable cases to shorten the admission period and to save these eyes.

Microbial scleritis-experience from a developing country.

V. Jain,  S. Sharma,  Bhuwan P. Garg (2009)
The purpose of this article was to study the clinical features, pathogenic organisms, and the outcome in cases of infectious scleritis. Retrospective chart review of all patients of infectious scleritis examined from January 2000 to February 2005 in the cornea services of L.V. Prasad Eye Institute, Hyderabad, India was done. Information including patient's age, predisposing factors, clinical presentation, pathogenic organism, methods of diagnosis, treatment, and outcome were abstracted from the medical records. A total of 21 eyes of infectious scleritis were identified. All except three eyes had preceding predisposing factors, prior cataract surgery (6 eyes) (30%) and pterygium surgery (5 eyes) (23.8%) were the most common predisposing factors. Fungus (8 eyes) (38%), either alone (5 eyes) (24%) or as mixed infection (3 eyes) (14%), was the most common offending organism. Nocardia was identified in five eyes (24%) and Pseudomonas aeruginosa in two eyes (10%). Seven eyes (33%) had accompanying corneal infiltration. Multifocal scleral abscess was seen in three eyes (14%) and endophthalmitis was seen in three eyes (14%). During the course of treatment, five eyes (24%) were complicated by serous retinal or choroidal detachment and five eyes (24%) with progression of cataract. Surgical debridement was carried out in 14 eyes (67%). Four eyes (19%) were eviscerated. Useful vision, defined as visual acuity > or = 20/200, could be preserved with treatment in seven eyes (33%). Although predisposing factors were similar, fungi and Nocardia were the most common etiological agents in this series and the clinical outcomes were poorer.

Joseph K H Ma,  Wei Chen,  Ying Chen … (1997)
To assess the clinical pictures, possible pathogenesis, management, and therapy of patients with infectious scleritis associated with multifocal scleral abscesses following pterygium excision. The records of patients with infectious scleritis after pterygium excision who developed multifocal scleral abscesses presenting from 1988 to the end of 1995 were reviewed. Early culture of abscesses was performed, and topical, systemic antimicrobials, or both were given to all patients. Fourteen eyes were operated on in addition to antimicrobial treatment. The initial culture reports of scleral ulcers identified Pseudomonas species in 12 of these 18 patients, Aspergillus in one, Mycobacterium fortuitum in one, and mixed organisms in four. Subsequent abscess cultures were taken from 15 of the infected eyes, and revealed the same organism as the initial culture in 12. Associated complications included four serous retinal detachments, three choroidal detachments, two double detachments, five complicated cataracts, and four recurrences of the initial infection. Four eyes required eventual enucleation and 11 eyes regained useful vision. With subsequent abscess cultures proving to be the same organism as found in the initial ulcer, the abscess formation appears to represent intrascleral dissemination. Early diagnosis and appropriate, prolonged topical plus systemic antimicrobial treatment are essential to halt the progression of such severe infections.