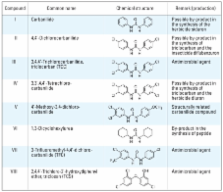 Concerns have been raised about the biological and toxicologic effects of the antimicrobials triclocarban (TCC) and triclosan (TCS) in personal care products. Few studies have evaluated their biological activities in mammalian cells to assess their potential for adverse effects.

In this study, we assessed the activity of TCC, its analogs, and TCS in in vitro nuclear-receptor–responsive and calcium signaling bioassays.

We determined the biological activities of the compounds in in vitro, cell-based, and nuclear-receptor–responsive bioassays for receptors for aryl hydrocarbon (AhR), estrogen (ER), androgen (AR), and ryanodine (RyR1).

Carbanilides, including TCC, enhanced hormone-dependent induction of ER- and AR-dependent gene expression but had little agonist activity, suggesting a new mechanism of action of endocrine-disrupting compounds. TCS, structurally similar to noncoplanar ortho-substituted poly-chlorinated biphenyls, exhibited weak AhR activity but interacted with RyR1 and stimulated Ca 2+ mobilization. These observations have potential implications for human and animal health. Further investigations are needed into the biological and toxicologic effects of TCC, its analogs, and TCS.

Pharmaceuticals and personal care products in the environment: agents of subtle change?

C Daughton,  T Ternes (1999)
During the last three decades, the impact of chemical pollution has focused almost exclusively on the conventional "priority" pollutants, especially those acutely toxic/carcinogenic pesticides and industrial intermediates displaying persistence in the environment. This spectrum of chemicals, however, is only one piece of the larger puzzle in "holistic" risk assessment. Another diverse group of bioactive chemicals receiving comparatively little attention as potential environmental pollutants includes the pharmaceuticals and active ingredients in personal care products (in this review collectively termed PPCPs), both human and veterinary, including not just prescription drugs and biologics, but also diagnostic agents, "nutraceuticals," fragrances, sun-screen agents, and numerous others. These compounds and their bioactive metabolites can be continually introduced to the aquatic environment as complex mixtures via a number of routes but primarily by both untreated and treated sewage. Aquatic pollution is particularly troublesome because aquatic organisms are captive to continual life-cycle, multigenerational exposure. The possibility for continual but undetectable or unnoticed effects on aquatic organisms is particularly worrisome because effects could accumulate so slowly that major change goes undetected until the cumulative level of these effects finally cascades to irreversible change--change that would otherwise be attributed to natural adaptation or ecologic succession. As opposed to the conventional, persistent priority pollutants, PPCPs need not be persistent if they are continually introduced to surface waters, even at low parts-per-trillion/parts-per-billion concentrations (ng-microg/L). Even though some PPCPs are extremely persistent and introduced to the environment in very high quantities and perhaps have already gained ubiquity worldwide, others could act as if they were persistent, simply because their continual infusion into the aquatic environment serves to sustain perpetual life-cycle exposures for aquatic organisms. This review attempts to synthesize the literature on environmental origin, distribution/occurrence, and effects and to catalyze a more focused discussion in the environmental science community.

Connections and regulation of the human estrogen receptor.

Mark McDonnell,  D. Ryan Norris (2002)
Estrogen regulates a plethora of functionally dissimilar processes in a broad range of tissues. Recent progress in the study of the molecular mechanism of action of estrogen(s) has revealed why different cells can respond to the same hormone in a different manner. Three of these findings are of particular importance: (i) There are two genetically and functionally distinct estrogen receptors that have distinct expression patterns in vivo; (ii) the positive and negative transcriptional activities of these receptors require them to engage transcription cofactors (coactivators or corepressors) in target cells; and (iii) not all cofactors are functionally equivalent, nor are they expressed in the same manner in all cells. Thus, although the estrogen receptor is required for a cell to respond to an estrogenic stimulus, the nature and extent of that response are determined by the proteins, pathways, and processes with which the receptor interacts.

Tie-E Zhang,  J. Peter Rubin,  Nicholas Holland … (1999)
Triclosan is a broad-spectrum antibacterial agent that inhibits bacterial fatty acid synthesis at the enoyl-acyl carrier protein reductase (FabI) step. Resistance to triclosan in Escherichia coli is acquired through a missense mutation in the fabI gene that leads to the expression of FabI[G93V]. The specific activity and substrate affinities of FabI[G93V] are similar to FabI. Two different binding assays establish that triclosan dramatically increases the affinity of FabI for NAD+. In contrast, triclosan does not increase the binding of NAD+ to FabI[G93V]. The x-ray crystal structure of the FabI-NAD+-triclosan complex confirms that hydrogen bonds and hydrophobic interactions between triclosan and both the protein and the NAD+ cofactor contribute to the formation of a stable ternary complex, with the drug binding at the enoyl substrate site. These data show that the formation of a noncovalent "bi-substrate" complex accounts for the effectiveness of triclosan as a FabI inhibitor and illustrates that mutations in the FabI active site that interfere with the formation of a stable FabI-NAD+-triclosan ternary complex acquire resistance to the drug.

Publisher ID: ehp-116-1203
DOI: 10.1289/ehp.11200
PMC ID: 2535623
PubMed ID: 18795164
Copyright statement: This is an Open Access article: verbatim copying and redistribution of this article are permitted in all media for any purpose, provided this notice is preserved along with the article's original DOI.