A report of a new species and new record of Cadlina (Nudibranchia, Cadlinidae) from South Korea 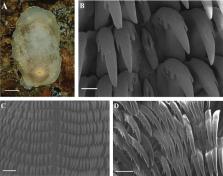 Of the four species in the genus Cadlina present in the northwestern Pacific region, C. japonica has been the only species recorded from South Korea. For the purpose of investigating Cadlina in Korean waters, specimens were collected from the Korean East Sea (Sea of Japan) by scuba diving. The radula and morphology of these specimens were examined by stereoscopic and scanning electron microscopy. Based on morphology, three species were identified in Korean waters, including the new species, Cadlina koreana sp. nov., C. umiushi (first record in South Korea), and C. japonica . Cadlina koreana sp. nov. somewhat resembles C. umiushi but differs in both its morphology as well as the structure of its radula. The background color of Cadlina koreana sp. nov. is translucent white, tubercles on the dorsum are opaque white and the yellow marginal band is absent. The radular formula of Cadlina koreana sp. nov. is 57 × 23.1.23 with a rectangular rachidian tooth. In addition, mitochondrial cytochrome c subunit 1 (COI), 16S ribosomal RNA (16S rRNA), and nuclear 28S ribosomal RNA (28S rRNA) gene sequences were generated and used for analysis of Automatic Barcode Gap Discovery (ABGD) and reconstruction of the phylogenetic tree. Morphological distinction and genetic analyses confirm that three Cadlina species are present in Korean waters of which Cadlina koreana is a new species.

Sudhir Kumar,  Glen Stecher,  Michael KaWah Li … (2018)
The Molecular Evolutionary Genetics Analysis (Mega) software implements many analytical methods and tools for phylogenomics and phylomedicine. Here, we report a transformation of Mega to enable cross-platform use on Microsoft Windows and Linux operating systems. Mega X does not require virtualization or emulation software and provides a uniform user experience across platforms. Mega X has additionally been upgraded to use multiple computing cores for many molecular evolutionary analyses. Mega X is available in two interfaces (graphical and command line) and can be downloaded from www.megasoftware.net free of charge.

Geneious Basic: An integrated and extendable desktop software platform for the organization and analysis of sequence data

Matthew Kearse,  Richard Moir,  Amy Wilson … (2012)
Summary: The two main functions of bioinformatics are the organization and analysis of biological data using computational resources. Geneious Basic has been designed to be an easy-to-use and flexible desktop software application framework for the organization and analysis of biological data, with a focus on molecular sequences and related data types. It integrates numerous industry-standard discovery analysis tools, with interactive visualizations to generate publication-ready images. One key contribution to researchers in the life sciences is the Geneious public application programming interface (API) that affords the ability to leverage the existing framework of the Geneious Basic software platform for virtually unlimited extension and customization. The result is an increase in the speed and quality of development of computation tools for the life sciences, due to the functionality and graphical user interface available to the developer through the public API. Geneious Basic represents an ideal platform for the bioinformatics community to leverage existing components and to integrate their own specific requirements for the discovery, analysis and visualization of biological data. Availability and implementation: Binaries and public API freely available for download at http://www.geneious.com/basic, implemented in Java and supported on Linux, Apple OSX and MS Windows. The software is also available from the Bio-Linux package repository at http://nebc.nerc.ac.uk/news/geneiousonbl. Contact: peter@biomatters.com