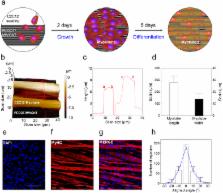 There has been continuous progress in the development for biomedical engineering systems of hybrid muscle generated by combining skeletal muscle and artificial structure. The main factor affecting the actuation performance of hybrid muscle relies on the compatibility between living cells and their muscle scaffolds during cell culture. Here, we developed a hybrid muscle powered by C2C12 skeletal muscle cells based on the functionalized multi-walled carbon nanotubes (MWCNT) sheets coated with poly(3,4-ethylenedioxythiophene) (PEDOT) to achieve biomimetic actuation. This hydrophilic hybrid muscle is physically durable in solution and responds to electric field stimulation with flexible movement. Furthermore, the biomimetic actuation when controlled by electric field stimulation results in movement similar to that of the hornworm by patterned cell culture method. The contraction and relaxation behavior of the PEDOT/MWCNT-based hybrid muscle is similar to that of the single myotube movement, but has faster relaxation kinetics because of the shape-maintenance properties of the freestanding PEDOT/MWCNT sheets in solution. Our development provides the potential possibility for substantial innovation in the next generation of cell-based biohybrid microsystems.

Mei Zhang,  Stephen N Atkinson,  Ray Baughman (2004)
By introducing twist during spinning of multiwalled carbon nanotubes from nanotube forests to make multi-ply, torque-stabilized yarns, we achieve yarn strengths greater than 460 megapascals. These yarns deform hysteretically over large strain ranges, reversibly providing up to 48% energy damping, and are nearly as tough as fibers used for bulletproof vests. Unlike ordinary fibers and yarns, these nanotube yarns are not degraded in strength by overhand knotting. They also retain their strength and flexibility after heating in air at 450 degrees C for an hour or when immersed in liquid nitrogen. High creep resistance and high electrical conductivity are observed and are retained after polymer infiltration, which substantially increases yarn strength.

Robert D. Langer,  Daniel Kohane,  Tal Dvir … (2010)
Tissue engineering aims at developing functional substitutes for damaged tissues and organs. Before transplantation, cells are generally seeded on biomaterial scaffolds that recapitulate the extracellular matrix and provide cells with information that is important for tissue development. Here we review the nanocomposite nature of the extracellular matrix, describe the design considerations for different tissues and discuss the impact of nanostructures on the properties of scaffolds and their uses in monitoring the behaviour of engineered tissues. We also examine the different nanodevices used to trigger certain processes for tissue development, and offer our view on the principal challenges and prospects of applying nanotechnology in tissue engineering.