Effects of Dexmedetomidine on the Pharmacokinetics of Dezocine, Midazolam and Its Metabolite 1-Hydroxymidazolam in Beagles by UPLC-MS/MS 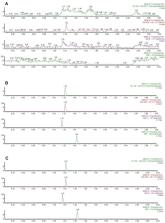 We developed and validated a sensitive and reliable UPLC-MS/MS method for simultaneous determination of dezocine (DEZ), midazolam (MDZ) and its metabolite 1-hydroxymidazolam (1-OH-MDZ) in beagle plasma and investigated the effect of dexmedetomidine (DEX) on the pharmacokinetics of DEZ, MDZ and 1-OH-MDZ in beagles.

Diazepam was used as the internal standard (IS); the three analytes and IS were extracted by acetonitrile precipitation and separated on an Acquity UPLC BEH C18 column using acetonitrile-0.1% formic acid as mobile phase in gradient mode. In positive ion mode, the three analytes and IS were monitored by multiple reaction monitoring (MRM). Six beagles were designed as a double cycle self-control experiment with 0.15 mg/kg in the first cycle (Group A). After a 1-week washout period, the same six beagles were slowly injected intravenously with 2 µg/kg DEX in the second cycle (Group B), with continuous injection for 7 days. On the seventh day, 0.5 hr after intravenous injection of 2 µg/kg DEX, the six beagles were intramuscularly given with DEZ 0.33 mg/kg and MDZ 0.15 mg/kg.

Under the conditions of this experiment, this method exhibited a good linearity for each analyte. The accuracy and precision were all within the acceptable limits in the bioanalytical method, and the results of recovery, matrix effect and stability have also met the requirements.

The developed UPLC-MS/MS method for simultaneous determination of DEZ, MDZ and 1-OH-MDZ in beagles plasma was accurate, reproducible, specific, and suitable. DEX could inhibit the metabolism of DEZ and MDZ and increase the exposure of DEZ and MDZ in beagles. Therefore, the change of therapeutic effect and the occurrence of adverse reactions caused by drug–drug interaction should be paid attention to when the drugs were used in combination.

Clinical Pharmacokinetics and Pharmacodynamics of Dexmedetomidine

Maud A. S. Weerink,  Michel M. R. F. Struys,  Laura N Hannivoort … (2017)
Dexmedetomidine is an α2-adrenoceptor agonist with sedative, anxiolytic, sympatholytic, and analgesic-sparing effects, and minimal depression of respiratory function. It is potent and highly selective for α2-receptors with an α2:α1 ratio of 1620:1. Hemodynamic effects, which include transient hypertension, bradycardia, and hypotension, result from the drug’s peripheral vasoconstrictive and sympatholytic properties. Dexmedetomidine exerts its hypnotic action through activation of central pre- and postsynaptic α2-receptors in the locus coeruleus, thereby inducting a state of unconsciousness similar to natural sleep, with the unique aspect that patients remain easily rousable and cooperative. Dexmedetomidine is rapidly distributed and is mainly hepatically metabolized into inactive metabolites by glucuronidation and hydroxylation. A high inter-individual variability in dexmedetomidine pharmacokinetics has been described, especially in the intensive care unit population. In recent years, multiple pharmacokinetic non-compartmental analyses as well as population pharmacokinetic studies have been performed. Body size, hepatic impairment, and presumably plasma albumin and cardiac output have a significant impact on dexmedetomidine pharmacokinetics. Results regarding other covariates remain inconclusive and warrant further research. Although initially approved for intravenous use for up to 24 h in the adult intensive care unit population only, applications of dexmedetomidine in clinical practice have been widened over the past few years. Procedural sedation with dexmedetomidine was additionally approved by the US Food and Drug Administration in 2003 and dexmedetomidine has appeared useful in multiple off-label applications such as pediatric sedation, intranasal or buccal administration, and use as an adjuvant to local analgesia techniques.

Dexmedetomidine: A Review of Its Use for Sedation in the Intensive Care Setting.

F Kanefendt,  Jürgen Wolf,  Uwe Fuhr … (2011)
Pyrimidine (imatinib, dasatinib, nilotinib and pazopanib), pyridine (sorafenib) and pyrrole (sunitinib) tyrosine kinase inhibitors (TKIs) are multi-targeted TKIs with high activity towards several families of receptor and non-receptor tyrosine kinases involved in angiogenesis, tumour growth and metastatic progression of cancer. These orally administered TKIs have quite diverse characteristics with regard to absorption from the gastrointestinal tract. Absolute bioavailability in humans has been investigated only for imatinib (almost 100%) and pazopanib (14-39%; n = 3). On the basis of human radioactivity data, dasatinib is considered to be well absorbed after oral administration (19% and 0.1% of the total radioactivity were excreted as unchanged dasatinib in the faeces and urine, respectively). Quite low absolute bioavailability under fasted conditions is assumed for nilotinib (31%), sorafenib (50%) and sunitinib (50%). Imatinib, dasatinib and sunitinib exhibit dose-proportional increases in their area under the plasma concentration-time curve values over their therapeutic dose ranges. Less than dose-proportional increases were observed for nilotinib at doses ≥400 mg/day and for sorafenib and pazopanib at doses ≥800 mg/day. At steady state, the accumulation ratios are 1.5-2.5 (unchanged imatinib), 2.0 (nilotinib once-daily dosing), 3.4 (nilotinib twice-daily dosing), 1.2-4.5 (pazopanib), 5.7-6.4 (sorafenib) and 3.0-4.5 (sunitinib). Concomitant intake of a high-fat meal does not alter exposure to imatinib, dasatinib and sunitinib but leads to considerably increased bioavailability of nilotinib and pazopanib and decreased bioavailability of sorafenib. With the exception of pazopanib, the TKIs described here have large apparent volumes of distribution, exceeding the volume of body water by at least 4-fold. Very low penetration into the central nervous system in humans has been reported for imatinib and dasatinib, but there are currently no published human data for nilotinib, pazopanib, sorafenib or sunitinib. All TKIs that have been described are more than 90% bound to the plasma proteins: α(1)-acid glycoprotein and/or albumin. They are metabolized primarily via cytochrome P450 (CYP) 3A4, the only exception being sorafenib, for which uridine diphosphate glucuronosyltransferase 1A9 is the other main enzyme involved. Active metabolites of imatinib and sunitinib contribute to their antitumour activity. Although some patient demographics have been identified as significant co-factors that partly explain interindividual variability in exposure to TKIs, these findings have not been regarded as sufficient to recommend age-, sex-, bodyweight- or ethnicity-specific dose adjustment. Systemic exposure to imatinib, sorafenib and pazopanib increases in patients with hepatic impairment, and reduction of the initial therapeutic dose is recommended in this subpopulation. The starting dose of imatinib should also be reduced in renally impaired subjects. Because the solubility of dasatinib is pH dependent, co-administration of histamine H(2)-receptor antagonists and proton pump inhibitors with dasatinib should be avoided. With the exception of sorafenib, systemic exposure to TKIs is significantly decreased/increased by co-administration of potent CYP3A4 inducers/inhibitors, and so it is strongly recommended that the TKI dose is adjusted or that such co-administration is avoided. Caution is also recommended for co-administration of CYP3A4 substrates with TKIs, especially for those with a narrow therapeutic index. However, current recommendations with regard to dose adjustment of TKIs need to be validated in clinical studies. Further investigations are needed to explain the large interindividual variability in the pharmacokinetics of these drugs and to assess theclinical relevance of their interaction potential and inhibitory effects on metabolizing enzymes and transporters.