Osteoporosis – a current view of pharmacological prevention and treatment 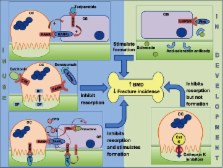 Postmenopausal osteoporosis is the most common bone disease, associated with low bone mineral density (BMD) and pathological fractures which lead to significant morbidity. It is defined clinically by a BMD of 2.5 standard deviations or more below the young female adult mean (T-score =−2.5). Osteoporosis was a huge global problem both socially and economically – in the UK alone, in 2011 £6 million per day was spent on treatment and social care of the 230,000 osteoporotic fracture patients – and therefore viable preventative and therapeutic approaches are key to managing this problem within the aging population of today. One of the main issues surrounding the potential of osteoporosis management is diagnosing patients at risk before they develop a fracture. We discuss the current and future possibilities for identifying susceptible patients, from fracture risk assessment to shape modeling and in relation to the high heritability of osteoporosis now that a plethora of genes have been associated with low BMD and osteoporotic fracture. This review highlights the current therapeutics in clinical use (including bisphosphonates, anti-RANKL [receptor activator of NF-κB ligand], intermittent low dose parathyroid hormone, and strontium ranelate) and some of those in development (anti-sclerostin antibodies and cathepsin K inhibitors). By highlighting the intimate relationship between the activities of bone forming (osteoblasts) and bone-resorbing (osteoclasts) cells, we include an overview and comparison of the molecular mechanisms exploited in each therapy.

Atsushi Watanabe,  Shigeki Yoneyama,  Mikio Nakajima … (2012)
Teriparatide, a therapeutic agent for osteoporosis, has been reported to increase the incidences of bone neoplasms such as osteosarcoma when administered subcutaneously to Fischer 344 (F344) rats for a long term, but its non-carcinogenic dose level following 2-year daily administration has not been established. Here we report detailed studies on the carcinogenicity of teriparatide following long-term administration. When teriparatide was administered subcutaneously to male and female Sprague-Dawley (SD) rats daily for 2 years, the incidence of osteosarcoma was increased at 13.6 µg/kg/day. The non-carcinogenic dose level was 4.5 µg/kg/day for both males and females. The development of osteosarcoma in SD rats depends on the dose level of, and treatment duration with, teriparatide. Responses of the bones to teriparatide were similar between F344 and SD rats in many aspects. These results suggested that the carcinogenic potential of teriparatide in SD rats is essentially the same as in F344 rats.

Pitfalls in the external validation of FRAX.

Kara McCloskey,  J Kanis,  A Oden-Gangloff … (2012)
Recent studies have evaluated the performance of FRAX® in independent cohorts. The interpretation of most is problematic for reasons summarised in this perspective. FRAX is an extensively validated assessment tool for the prediction of fracture in men and women. The aim of this study was to review the methods used since the launch of FRAX to further evaluate this instrument. This covers a critical review of studies investigating the calibration of FRAX or assessing its performance characteristics in external cohorts. Most studies used inappropriate methodologies to compare the performance characteristics of FRAX with other models. These included discordant parameters of risk (comparing incidence with probabilities), comparison with internally derived predictors and inappropriate use and interpretation of receiver operating characteristic curves. These deficits markedly impair interpretation of these studies. Cohort studies that have evaluated the performance of FRAX need to be interpreted with caution and preferably re-evaluated.

Women with previous fragility fractures can be classified based on bone microarchitecture and finite element analysis measured with HR-pQCT.