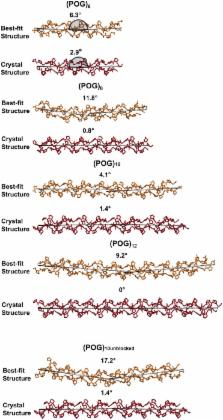 Collagen adopts a characteristic supercoiled triple helical conformation which requires a repeating (Xaa-Yaa-Gly) n sequence. Despite the abundance of collagen, a combined experimental and atomistic modelling approach has not so far quantitated the degree of flexibility seen experimentally in the solution structures of collagen triple helices. To address this question, we report an experimental study on the flexibility of varying lengths of collagen triple helical peptides, composed of six, eight, ten and twelve repeats of the most stable Pro-Hyp-Gly (POG) units. In addition, one unblocked peptide, (POG) 10unblocked, was compared with the blocked (POG) 10 as a control for the significance of end effects. Complementary analytical ultracentrifugation and synchrotron small angle X-ray scattering data showed that the conformations of the longer triple helical peptides were not well explained by a linear structure derived from crystallography. To interpret these data, molecular dynamics simulations were used to generate 50 000 physically realistic collagen structures for each of the helices. These structures were fitted against their respective scattering data to reveal the best fitting structures from this large ensemble of possible helix structures. This curve fitting confirmed a small degree of non-linearity to exist in these best fit triple helices, with the degree of bending approximated as 4–17° from linearity. Our results open the way for further studies of other collagen triple helices with different sequences and stabilities in order to clarify the role of molecular rigidity and flexibility in collagen extracellular and immune function and disease.

Peter Schuck (2000)
A new method for the size-distribution analysis of polymers by sedimentation velocity analytical ultracentrifugation is described. It exploits the ability of Lamm equation modeling to discriminate between the spreading of the sedimentation boundary arising from sample heterogeneity and from diffusion. Finite element solutions of the Lamm equation for a large number of discrete noninteracting species are combined with maximum entropy regularization to represent a continuous size-distribution. As in the program CONTIN, the parameter governing the regularization constraint is adjusted by variance analysis to a predefined confidence level. Estimates of the partial specific volume and the frictional ratio of the macromolecules are used to calculate the diffusion coefficients, resulting in relatively high-resolution sedimentation coefficient distributions c(s) or molar mass distributions c(M). It can be applied to interference optical data that exhibit systematic noise components, and it does not require solution or solvent plateaus to be established. More details on the size-distribution can be obtained than from van Holde-Weischet analysis. The sensitivity to the values of the regularization parameter and to the shape parameters is explored with the help of simulated sedimentation data of discrete and continuous model size distributions, and by applications to experimental data of continuous and discrete protein mixtures.

Upgraded ESRF BM29 beamline for SAXS on macromolecules in solution