Changes in Heart Rate Variability Recorded in Natural Situation with T-Shirt Integrated Sensors and Level of Observed Behavioral Excitation: A Pilot Study of Patients with Intellectual Disabilities and Psychiatric Disorders 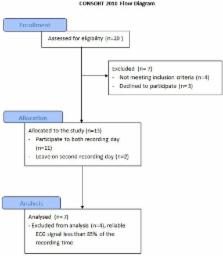 The present study investigates the possibilities of using heart rate variability (HRV) parameters as physiological markers that precede increase in observed behavioral excitation of intellectually disabled individuals. The ability to recognize or predict such patterns, especially in patients showing unpredictable reactions and language deficiencies, might be a major step forward in clinical research.

Thirteen volunteers with intellectual disabilities, who had suffered of at least one event of overt aggression in the preceding 3 months, participated to the study. The protocol consists in the acquisition of continuous electrocardiogram (ECG) throughout approximately two times of 8 h in natural situation, using a T-shirt integrated with sensors. Simultaneously, an observer evaluates the patient’s level of overt excitation from calm (level 1) to extremely tense (level 5) and send online via Bluetooth these triggers into the ECG signals. The HRV indexes were then estimated offline on the basis of the inter-beat intervals recorded by the ECG, independently for the 30 min preceding each behavioral tension marking point, averaged, and compared through non-parametric Wilcoxon matched-pairs test. Of these, the RMSSD and LF/HF calculations were used to observe the fluctuations of inhibitory activity and cardiovagal balance through different tension states.

The presence of precursors to agitation, reflected in the falling-off of parasympathetic activity, offers potentially interesting prospects for therapeutic development.

Heart rate variability as an index of regulated emotional responding.

The polyvagal theory: phylogenetic substrates of a social nervous system.

Stephen W. Porges (2001)
The evolution of the autonomic nervous system provides an organizing principle to interpret the adaptive significance of physiological responses in promoting social behavior. According to the polyvagal theory, the well-documented phylogenetic shift in neural regulation of the autonomic nervous system passes through three global stages, each with an associated behavioral strategy. The first stage is characterized by a primitive unmyelinated visceral vagus that fosters digestion and responds to threat by depressing metabolic activity. Behaviorally, the first stage is associated with immobilization behaviors. The second stage is characterized by the sympathetic nervous system that is capable of increasing metabolic output and inhibiting the visceral vagus to foster mobilization behaviors necessary for 'fight or flight'. The third stage, unique to mammals, is characterized by a myelinated vagus that can rapidly regulate cardiac output to foster engagement and disengagement with the environment. The mammalian vagus is neuroanatomically linked to the cranial nerves that regulate social engagement via facial expression and vocalization. As the autonomic nervous system changed through the process of evolution, so did the interplay between the autonomic nervous system and the other physiological systems that respond to stress, including the cortex, the hypothalamic-pituitary-adrenal axis, the neuropeptides of oxytocin and vasopressin, and the immune system. From this phylogenetic orientation, the polyvagal theory proposes a biological basis for social behavior and an intervention strategy to enhance positive social behavior.

Juha-Pekka Niskanen,  Mika P. Tarvainen,  Perttu Ranta-aho … (2004)
A computer program for advanced heart rate variability (HRV) analysis is presented. The program calculates all the commonly used time- and frequency-domain measures of HRV as well as the nonlinear Poincaré plot. In frequency-domain analysis parametric and nonparametric spectrum estimates are calculated. The program generates an informative printable report sheet which can be exported to various file formats including the portable document format (PDF). Results can also be saved as an ASCII file from which they can be imported to a spreadsheet program such as the Microsoft Excel. Together with a modern heart rate monitor capable of recording RR intervals this freely distributed program forms a complete low-cost HRV measuring and analysis system.

Specialty section: This article was submitted to Public Mental Health, a section of the journal Frontiers in Psychiatry