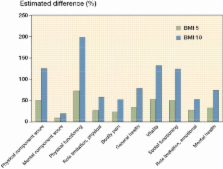 Obesity contributes much to the development of knee osteoarthritis. However, the association between obesity and outcome after knee replacement is controversial. We investigated whether there was an association between the preoperative body mass index (BMI) of patients who underwent total knee arthroplasty (TKA) and their quality of life (QoL) and physical function 3–5 years after surgery.

197 patients who had undergone primary TKA participated in a 3–5 year follow-up study. The outcome measures were the patient-reported Short Form 36 (SF-36) and the American Knee Society score (KSS).

Our findings indicate that TKA patients’ preoperative BMI is a predictor of the clinical effect and patients’ quality of life 3–5 years postoperatively. A high BMI increases the risk of poor QoL (SF-36) and physical function (KSS).

R. Walker,  D Felson,  K. Anderson … (1988)
To determine whether obesity preceded knee osteoarthritis and was thus a possible cause. Cohort study with weight and other important variables measured in 1948 to 1951 (mean age of subjects, 37 years) and knee arthritis evaluated in 1983 to 1985 (mean age of subjects, 73 years). Population-based participants; a subset (n = 1420) of the Framingham Heart Study cohort. For those subjects in the Framingham Study having knee radiographs taken as part of the 18th biennial examination (1983 to 1985), we examined Metropolitan Relative Weight, a measure of weight adjusted for height at the onset of the study (1948 to 1951). Relative risks were computed as the cumulative incidence rate of radiographic knee osteoarthritis in the heaviest weight groups at examination 1 divided by the cumulative rate in the lightest 60% weight groups at examination 1. Relative risks were adjusted for age, physical activity level, and uric acid level. In 1983 to 1985, 468 subjects (33%) had radiographic knee osteoarthritis. For men, the risk of knee osteoarthritis was increased in those in the heaviest quintile of weight at examination 1 compared with those in the lightest three quintiles (age-adjusted relative risk, 1.51; 95% confidence interval [CI], 1.14 to 1.98); risk was not increased for those in the second heaviest quintile (relative risk, 1.0). The association between weight and knee osteoarthritis was stronger in women than in men; for women in the most overweight quintile at examination 1, relative risk was 2.07 (95% CI, 1.67 to 2.55), and for those in the second heaviest group, relative risk was 1.44 (95% CI, 1.11 to 1.86). This link between obesity and subsequent osteoarthritis persisted after controlling for serum uric acid level and physical activity level, and was strongest for persons with severest radiographic disease. Obesity at examination 1 was associated with the risk of developing both symptomatic and asymptomatic osteoarthritis. These results and other corroborative cross-sectional data show that obesity or as yet unknown factors associated with obesity cause knee osteoarthritis.

Is obesity a risk factor for progressive radiographic knee osteoarthritis?

P Aliabadi,  J Niu,  M Nevitt … (2009)
To examine whether obesity increases the risk of progression of knee osteoarthritis (OA). We used data from the Multicenter Osteoarthritis Study, a longitudinal study of persons with or at high risk of knee OA. OA was characterized at baseline and 30 months using posteroanterior fixed-flexion radiographs and Kellgren/Lawrence (K/L) grading, with alignment assessed on full-extremity films. In knees with OA at baseline (K/L grade 2 or 3), progression was defined as tibiofemoral joint space narrowing on the 30-month radiograph. In knees without OA at baseline (K/L grade 0 or 1), incident OA was defined as the development of radiographic OA at 30 months. Body mass index (BMI) at baseline was classified as normal ( or=35 kg/m(2)). The risk of progression was tested in all knees and in subgroups categorized according to alignment. Analyses were adjusted for age, sex, knee injury, and bone density. Among the 2,623 subjects (5,159 knees), 60% were women, and the mean +/- SD age was 62.4 +/- 8.0 years. More than 80% of subjects were overweight or obese. At baseline, 36.4% of knees had tibiofemoral OA, and of those, only one-third were neutrally aligned. Compared with subjects with a normal BMI, those who were obese or very obese were at an increased risk of incident OA (relative risk 2.4 and 3.2, respectively [P for trend < 0.001]); this risk extended to knees from all alignment groups. Among knees with OA at baseline, there was no overall association between a high BMI and the risk of OA progression; however, an increased risk of progression was observed among knees with neutral but not varus alignment. The effect of obesity was intermediate in those with valgus alignment. Although obesity was a risk factor for incident knee OA, we observed no overall relationship between obesity and the progression of knee OA. Obesity was not associated with OA progression in knees with varus alignment; however, it did increase the risk of progression in knees with neutral or valgus alignment. Therefore, weight loss may not be effective in preventing progression of structural damage in OA knees with varus alignment.

A R M Ruhul Amin,  I Brenkel,  Alex Cook … (2006)
A total of 370 consecutive primary total knee replacements performed for osteoarthritis were followed up prospectively at 6, 18, 36 and 60 months. The Knee Society score and complications (perioperative mortality, superficial and deep wound infection, deep-vein thrombosis and revision rate) were recorded. By dividing the study sample into subgroups based on the body mass index overall, the body mass index in female patients and the absolute body-weight. The outcome in obese and non-obese patients was compared. A repeated measures analysis of variance showed no difference in the Knee Society score between the subgroups. There was no statistically-significant difference in the complication rates for the subgroups studied. Obesity did not influence the clinical outcome five years after total knee replacement.

This is an open-access article distributed under the terms of the Creative Commons Attribution Noncommercial License which permits any noncommercial use, distribution, and reproduction in any medium, provided the source is credited.