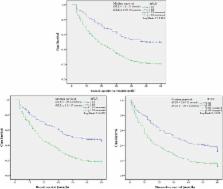 389 patients who had undergone gastrectomy were enrolled from 2007 to 2009 in this study. NLR, dNLR, PLR and LMR were calculated from peripheral blood cell count taken at pre-operation. Receiver operating curve (ROC) was used to determine the optimal cut-off levels for these biomarkers. A predictive model or nomogram was established to predict prognosis for cancer-specific survival (CSS) and disease-free survival (DFS), and the predictive accuracy of the nomogram was determined by concordance index (c-index).

The median follow-up period was 24 months ranging from 3 months to 60 months. The optimal cut-off levels were 2.36 for NLR, 1.85 for dNLR, 132 for PLR and 4.95 for LMR by ROC curves analysis. Elevated NLR, dNLR and PLR were significantly associated with worse overall survival (OS), CSS and DFS, however, elevated LMR showed an adverse effect on worse OS, CSS and DFS. Multivariate analysis revealed that elevated dNLR was an independent factor for worse OS, and NLR was superior to dNLR, PLR and LMR in terms of hazard ratio (HR = 1.53, 95% CI = 1.11-2.11, P = 0.010), which was shown to be independent prognostic indicators for both CSS and DFS. Moreover, the nomogram could more accurately predict CSS (c-index: 0.89) and DFS (c-index: 0.84) in surgical GC patients.

Principles and practical application of the receiver-operating characteristic analysis for diagnostic tests.

M. Greiner,  D. Pfeiffer,  R.D. Smith (2000)
We review the principles and practical application of receiver-operating characteristic (ROC) analysis for diagnostic tests. ROC analysis can be used for diagnostic tests with outcomes measured on ordinal, interval or ratio scales. The dependence of the diagnostic sensitivity and specificity on the selected cut-off value must be considered for a full test evaluation and for test comparison. All possible combinations of sensitivity and specificity that can be achieved by changing the test's cut-off value can be summarised using a single parameter; the area under the ROC curve. The ROC technique can also be used to optimise cut-off values with regard to a given prevalence in the target population and cost ratio of false-positive and false-negative results. However, plots of optimisation parameters against the selected cut-off value provide a more-direct method for cut-off selection. Candidates for such optimisation parameters are linear combinations of sensitivity and specificity (with weights selected to reflect the decision-making situation), odds ratio, chance-corrected measures of association (e. g. kappa) and likelihood ratios. We discuss some recent developments in ROC analysis, including meta-analysis of diagnostic tests, correlated ROC curves (paired-sample design) and chance- and prevalence-corrected ROC curves.