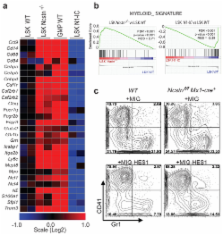 Notch signaling is a central regulator of differentiation in a variety of organisms and tissue types 1 . Its activity is controlled by the multi-subunit γ–secretase complex (γSE) complex 2 . Although Notch signaling can play both oncogenic and tumor suppressor roles in solid tumors, in the hematopoietic system, it is exclusively oncogenic, notably in T cell acute lymphoblastic leukemia (T-ALL), a disease characterized by Notch1 activating mutations 3 . Here we identify novel somatic inactivating Notch pathway mutations in a fraction of chronic myelomonocytic leukemia (CMML) patients. Inactivation of Notch signaling in mouse hematopoietic stem cells (HSC) resulted in an aberrant accumulation of granulocyte/monocyte progenitors (GMP), extramedullary hematopoieisis and the induction of CMML-like disease. Transcriptome analysis revealed that Notch signaling regulates an extensive myelomonocytic-specific gene signature, through the direct suppression of gene transcription by the Notch target Hes1. Our studies identify a novel role for Notch signaling during early hematopoietic stem cell differentiation and suggest that the Notch pathway can play both tumor-promoting and suppressive roles within the same tissue.

K Rajewsky,  F Schwenk,  M Aguet … (1995)
A method of gene targeting that allows the inducible inactivation of a target gene in mice is presented. The method uses an interferon-responsive promoter to control the expression of Cre recombinase. Here, Cre was used to delete a segment of the DNA polymerase beta gene flanked by IoxP recombinase recognition sites. Deletion was complete in liver and nearly complete in lymphocytes within a few days, whereas partial deletion was obtained in other tissues. This method can be used for the inducible inactivation of any other gene in vivo.

Grant A. Challen,  Nathan Boles,  Stuart Chambers … (2010)
The traditional view of hematopoiesis has been that all the cells of the peripheral blood are the progeny of a unitary homogeneous pool of hematopoietic stem cells (HSCs). Recent evidence suggests that the hematopoietic system is actually maintained by a consortium of HSC subtypes with distinct functional characteristics. We show here that myeloid-biased HSCs (My-HSCs) and lymphoid-biased HSCs (Ly-HSCs) can be purified according to their capacity for Hoechst dye efflux in combination with canonical HSC markers. These phenotypes are stable under natural (aging) or artificial (serial transplantation) stress and are exacerbated in the presence of competing HSCs. My- and Ly-HSCs respond differently to TGF-beta1, presenting a possible mechanism for differential regulation of HSC subtype activation. This study demonstrates definitive isolation of lineage-biased HSC subtypes and contributes to the fundamental change in view that the hematopoietic system is maintained by a continuum of HSC subtypes, rather than a functionally uniform pool. 2010 Elsevier Inc. All rights reserved.

A Tefferi (2010)
Myeloproliferative neoplasms (MPNs) originate from genetically transformed hematopoietic stem cells that retain the capacity for multilineage differentiation and effective myelopoiesis. Beginning in early 2005, a number of novel mutations involving Janus kinase 2 (JAK2), Myeloproliferative Leukemia Virus (MPL), TET oncogene family member 2 (TET2), Additional Sex Combs-Like 1 (ASXL1), Casitas B-lineage lymphoma proto-oncogene (CBL), Isocitrate dehydrogenase (IDH) and IKAROS family zinc finger 1 (IKZF1) have been described in BCR-ABL1-negative MPNs. However, none of these mutations were MPN specific, displayed mutual exclusivity or could be traced back to a common ancestral clone. JAK2 and MPL mutations appear to exert a phenotype-modifying effect and are distinctly associated with polycythemia vera, essential thrombocythemia and primary myelofibrosis; the corresponding mutational frequencies are ∼99, 55 and 65% for JAK2 and 0, 3 and 10% for MPL mutations. The incidence of TET2, ASXL1, CBL, IDH or IKZF1 mutations in these disorders ranges from 0 to 17% these latter mutations are more common in chronic (TET2, ASXL1, CBL) or juvenile (CBL) myelomonocytic leukemias, mastocytosis (TET2), myelodysplastic syndromes (TET2, ASXL1) and secondary acute myeloid leukemia, including blast-phase MPN (IDH, ASXL1, IKZF1). The functional consequences of MPN-associated mutations include unregulated JAK-STAT (Janus kinase/signal transducer and activator of transcription) signaling, epigenetic modulation of transcription and abnormal accumulation of oncoproteins. However, it is not clear as to whether and how these abnormalities contribute to disease initiation, clonal evolution or blastic transformation.

These authors have contributed equally to the study