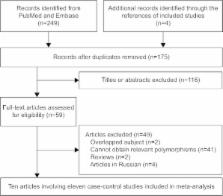 The aim of the present study was to investigate the association between tumor necrosis factor-alpha (TNF-α) gene G-238A polymorphism and risk of coronary artery disease (CAD) using a meta-analytical approach.

The PubMed and Embase databases were searched for relevant publications up to January 13, 2015. Four authors (XPH, XDZ, XTZ, and ZJZ) independently selected the studies, extracted, and analyzed the data using the Comprehensive Meta-Analysis software. The sensitivity and subgroups analyses were also performed. Either a fixed effects or a random effects model was used to estimate pooled odds ratios (ORs) and their 95% confidence intervals (CIs).

Based on current evidence, we can conclude that TNF-α G-238A polymorphism might not be associated with CAD risk.

Tetsuya Ohira,  Hiroyasu Iso (2012)
Cardiovascular disease (CVD) is the leading cause of death in the world and half of the cases of CVD are estimated to occur in Asia. Compared with Western countries, most Asian countries, except for Japan, South Korea, Singapore and Thailand, have higher age-adjusted mortality from CVD. In Japan, the mortality from CVD, especially stroke, has declined continuously from the 1960s to the 2000s, which has contributed to making Japan into the top-ranking country for longevity in the world. Hypertension and smoking are the most notable risk factors for stroke and coronary artery disease, whereas dyslipidemia and diabetes mellitus are risk factors for ischemic heart disease and ischemic stroke. The nationwide approach to hypertension prevention and control has contributed to a substantial decline in stroke mortality in Japan. Recent antismoking campaigns have contributed to a decline in the smoking rate among men. Conversely, the prevalence of dyslipidemia and diabetes mellitus increased from the 1980s to the 2000s and, therefore, the population-attributable risks of CVD for dyslipidemia and diabetes mellitus have increased moderately. To prevent future CVD in Asia, the intensive prevention programs for hypertension and smoking should be continued and that for emerging metabolic risk factors should be intensified in Japan. The successful intervention programs in Japan can be applied to other Asian countries.

Isobel R Gowers,  Kevin Walters,  Endre Kiss-Toth … (2011)
Dysregulated production of TNF has been implicated in the pathogenesis and severity of inflammatory rheumatic diseases, many of which show age-related increased incidence. Ageing is also associated with changes in the immune system including higher systemic levels of pro-inflammatory cytokines. Methylation of DNA is an important regulator of gene expression and changes with age. In this study we investigated whether the DNA methylation status of the TNF promoter changed with age in peripheral blood leucocytes and macrophages. Using pyrosequencing assays we detected age-related demethylation of CpG motifs (-304, -245 and -239) in the TNF promoter in human peripheral blood cells from 312 healthy controls (0.8% per decade, confidence interval (CI)=0.44-1.13%, p=1×10(-5)) and primary monocyte-derived macrophages (MDM) from a separate population of 78 healthy controls (1.4% per decade, CI=0.79-2.13%, p=7×10(-5)). Methylation a TNF promoter fragment (-345-+154) resulted in 78% reduction of reporter gene activity compared with the unmethylated promoter construct. These data suggest a potential role of accrued changes in DNA methylation in the development of age-related inflammatory diseases, such as rheumatoid arthritis and polymyalgia rheumatica, in which TNF is a pivotal mediator. Copyright © 2011 Elsevier Ltd. All rights reserved.