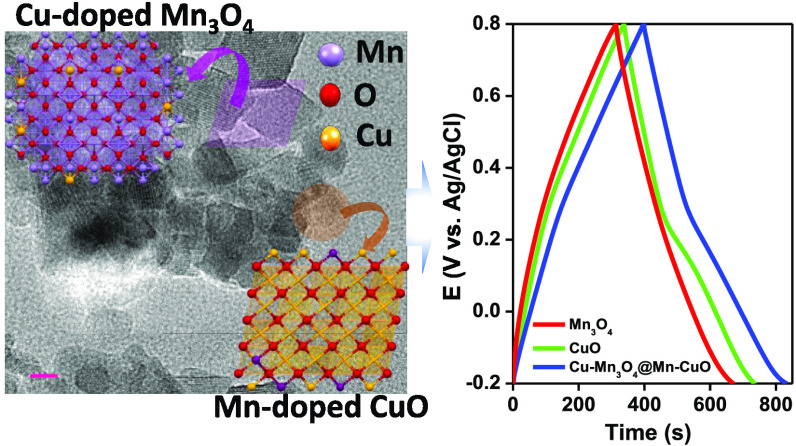 Cu-doped Mn 3O 4 and Mn-doped CuO (CMO@MCO) mixed oxides with isolated phases together with pristine Mn 3O 4 (MO) and CuO (CO) have been synthesized by a simple solution process for applications in electrochemical supercapacitors. The crystallographic, spectroscopic, and morphological analyses revealed the formation of all of the materials with good crystallinity and purity with the creation of rhombohedral-shaped MO and CMO and a mixture of spherical and rod-shaped CO and MCO nanostructures. The ratio of CMO and MCO in the optimized CMO@MCO was 2:1 with the Cu and Mn dopants percentages of 12 and 15%, respectively. The MO-, CO-, and CMO@MCO-modified carbon cloth (CC) electrodes delivered the specific capacitance ( C s) values of 541.1, 706.7, and 997.2 F/g at 5 mV/s and 413.4, 480.5, and 561.1 F/g at 1.3 A/g, respectively. This enhanced C s value of CMO@MCO with an energy density and a power density of 78.0 Wh/kg and 650.0 W/kg, respectively, could be attributed to the improvement of electrical conductivity induced by the dopants and the high percentage of oxygen vacancies. This corroborated to a decrease in the optical band gap and charge-transfer resistance ( R ct) of CMO@MCO at the electrode/electrolyte interface compared to those of MO and CO. The net enhancement of the Faradaic contribution induced by the redox reaction of the dopant and improved surface area was also responsible for the better electrochemical performance of CMO@MCO. The CMO@MCO/CC electrode showed high electrochemical stability with a C s loss of only ca. 4.7%. This research could open up new possibilities for the development of doped mixed oxides for high-performance supercapacitors.

Mingjia Zhi,  Chengcheng Xiang,  Nianqiang Wu … (2013)
This paper presents a review of the research progress in the carbon-metal oxide composites for supercapacitor electrodes. In the past decade, various carbon-metal oxide composite electrodes have been developed by integrating metal oxides into different carbon nanostructures including zero-dimensional carbon nanoparticles, one-dimensional nanostructures (carbon nanotubes and carbon nanofibers), two-dimensional nanosheets (graphene and reduced graphene oxides) as well as three-dimensional porous carbon nano-architectures. This paper has described the constituent, the structure and the properties of the carbon-metal oxide composites. An emphasis is placed on the synergistic effects of the composite on the performance of supercapacitors in terms of specific capacitance, energy density, power density, rate capability and cyclic stability. This paper has also discussed the physico-chemical processes such as charge transport, ion diffusion and redox reactions involved in supercapacitors.

Yonggang Wang,  Yanfang Song,  Yongyao Xia (2016)
Electrochemical capacitors (i.e. supercapacitors) include electrochemical double-layer capacitors that depend on the charge storage of ion adsorption and pseudo-capacitors that are based on charge storage involving fast surface redox reactions. The energy storage capacities of supercapacitors are several orders of magnitude higher than those of conventional dielectric capacitors, but are much lower than those of secondary batteries. They typically have high power density, long cyclic stability and high safety, and thus can be considered as an alternative or complement to rechargeable batteries in applications that require high power delivery or fast energy harvesting. This article reviews the latest progress in supercapacitors in charge storage mechanisms, electrode materials, electrolyte materials, systems, characterization methods, and applications. In particular, the newly developed charge storage mechanism for intercalative pseudocapacitive behaviour, which bridges the gap between battery behaviour and conventional pseudocapacitive behaviour, is also clarified for comparison. Finally, the prospects and challenges associated with supercapacitors in practical applications are also discussed.