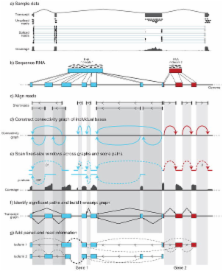 RNA-Seq provides an unbiased way to study a transcriptome, including both coding and non-coding genes. To date, most RNA-Seq studies have critically depended on existing annotations, and thus focused on expression levels and variation in known transcripts. Here, we present Scripture, a method to reconstruct the transcriptome of a mammalian cell using only RNA-Seq reads and the genome sequence. We apply it to mouse embryonic stem cells, neuronal precursor cells, and lung fibroblasts to accurately reconstruct the full-length gene structures for the vast majority of known expressed genes. We identify substantial variation in protein-coding genes, including thousands of novel 5′-start sites, 3′-ends, and internal coding exons. We then determine the gene structures of over a thousand lincRNA and antisense loci. Our results open the way to direct experimental manipulation of thousands of non-coding RNAs, and demonstrate the power of ab initio reconstruction to render a comprehensive picture of mammalian transcriptomes.

The transcriptional landscape of the mammalian genome.

P Carninci, T Kasukawa, S. Katayama … (2005)
This study describes comprehensive polling of transcription start and termination sites and analysis of previously unidentified full-length complementary DNAs derived from the mouse genome. We identify the 5' and 3' boundaries of 181,047 transcripts with extensive variation in transcripts arising from alternative promoter usage, splicing, and polyadenylation. There are 16,247 new mouse protein-coding transcripts, including 5154 encoding previously unidentified proteins. Genomic mapping of the transcriptome reveals transcriptional forests, with overlapping transcription on both strands, separated by deserts in which few transcripts are observed. The data provide a comprehensive platform for the comparative analysis of mammalian transcriptional regulation in differentiation and development.

Philipp Kapranov, Jill Cheng, Sujit Dike … (2007)
Significant fractions of eukaryotic genomes give rise to RNA, much of which is unannotated and has reduced protein-coding potential. The genomic origins and the associations of human nuclear and cytosolic polyadenylated RNAs longer than 200 nucleotides (nt) and whole-cell RNAs less than 200 nt were investigated in this genome-wide study. Subcellular addresses for nucleotides present in detected RNAs were assigned, and their potential processing into short RNAs was investigated. Taken together, these observations suggest a novel role for some unannotated RNAs as primary transcripts for the production of short RNAs. Three potentially functional classes of RNAs have been identified, two of which are syntenically conserved and correlate with the expression state of protein-coding genes. These data support a highly interleaved organization of the human transcriptome.