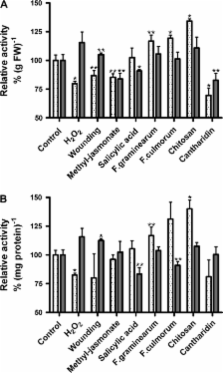 Plant peroxidases are involved in numerous cellular processes in plant development and stress responses. Four plasma membrane-bound peroxidases have been identified and characterized in maize ( Zea mays L.) roots. In the present study, maize seedlings were treated with different stresses and signal compounds, and a functional analysis of these membrane-bound class III peroxidases (pmPOX1, pmPOX2a, pmPOX2b, and pmPOX3) was carried out. Total guaiacol peroxidase activities from soluble and microsomal fractions of maize roots were compared and showed weak changes. By contrast, total plasma membrane and washed plasma membrane peroxidase activities, representing peripheral and integral membrane proteins, revealed strong changes after all of the stresses applied. A proteomic approach using 2D-PAGE analysis showed that pmPOX3 was the most abundant class III peroxidase at plasma membranes of control plants, followed by pmPOX2a >pmPOX2b >pmPOX1. The molecular mass (63 kDa) and the isoelectric point (9.5) of the pmPOX2a monomer were identified for the first time. The protein levels of all four enzymes changed in response to multiple stresses. While pmPOX2b was the only membrane peroxidase down-regulated by wounding, all four enzymes were differentially but strongly stimulated by methyl jasmonate, salicylic acid, and elicitors ( Fusarium graminearum and Fusarium culmorum extracts, and chitosan) indicating their function in pathogen defence. Oxidative stress applied as H 2O 2 treatment up-regulated pmPOX2b >pmPOX2a, while pmPOX3 was down-regulated. Treatment with the phosphatase inhibitor chantharidin resulted in distinct responses.

A Schützendübel (2002)
The aim of this review is to assess the mode of action and role of antioxidants as protection from heavy metal stress in roots, mycorrhizal fungi and mycorrhizae. Based on their chemical and physical properties three different molecular mechanisms of heavy metal toxicity can be distinguished: (a) production of reactive oxygen species by autoxidation and Fenton reaction; this reaction is typical for transition metals such as iron or copper, (b) blocking of essential functional groups in biomolecules, this reaction has mainly been reported for non-redox-reactive heavy metals such as cadmium and mercury, (c) displacement of essential metal ions from biomolecules; the latter reaction occurs with different kinds of heavy metals. Transition metals cause oxidative injury in plant tissue, but a literature survey did not provide evidence that this stress could be alleviated by increased levels of antioxidative systems. The reason may be that transition metals initiate hydroxyl radical production, which can not be controlled by antioxidants. Exposure of plants to non-redox reactive metals also resulted in oxidative stress as indicated by lipid peroxidation, H(2)O(2) accumulation, and an oxidative burst. Cadmium and some other metals caused a transient depletion of GSH and an inhibition of antioxidative enzymes, especially of glutathione reductase. Assessment of antioxidative capacities by metabolic modelling suggested that the reported diminution of antioxidants was sufficient to cause H(2)O(2) accumulation. The depletion of GSH is apparently a critical step in cadmium sensitivity since plants with improved capacities for GSH synthesis displayed higher Cd tolerance. Available data suggest that cadmium, when not detoxified rapidly enough, may trigger, via the disturbance of the redox control of the cell, a sequence of reactions leading to growth inhibition, stimulation of secondary metabolism, lignification, and finally cell death. This view is in contrast to the idea that cadmium results in unspecific necrosis. Plants in certain mycorrhizal associations are less sensitive to cadmium stress than non-mycorrhizal plants. Data about antioxidative systems in mycorrhizal fungi in pure culture and in symbiosis are scarce. The present results indicate that mycorrhization stimulated the phenolic defence system in the Paxillus-Pinus mycorrhizal symbiosis. Cadmium-induced changes in mycorrhizal roots were absent or smaller than those in non-mycorrhizal roots. These observations suggest that although changes in rhizospheric conditions were perceived by the root part of the symbiosis, the typical Cd-induced stress responses of phenolics were buffered. It is not known whether mycorrhization protected roots from Cd-induced injury by preventing access of cadmium to sensitive extra- or intracellular sites, or by excreted or intrinsic metal-chelators, or by other defence systems. It is possible that mycorrhizal fungi provide protection via GSH since higher concentrations of this thiol were found in pure cultures of the fungi than in bare roots. The development of stress-tolerant plant-mycorrhizal associations may be a promising new strategy for phytoremediation and soil amelioration measures.

R Bru,  Héctor Barcelo,  María A. Pedreño … (2008)
When plants are attacked by pathogens, they defend themselves with an arsenal of defence mechanisms, both passive and active. The active defence responses, which require de novo protein synthesis, are regulated through a complex and interconnected network of signalling pathways that mainly involve three molecules, salicylic acid (SA), jasmonic acid (JA), and ethylene (ET), and which results in the synthesis of pathogenesis-related (PR) proteins. Microbe or elicitor-induced signal transduction pathways lead to (i) the reinforcement of cell walls and lignification, (ii) the production of antimicrobial metabolites (phytoalexins), and (iii) the production of reactive oxygen species (ROS) and reactive nitrogen species (RNS). Among the proteins induced during the host plant defence, class III plant peroxidases (EC 1.11.1.7; hydrogen donor: H(2)O(2) oxidoreductase, Prxs) are well known. They belong to a large multigene family, and participate in a broad range of physiological processes, such as lignin and suberin formation, cross-linking of cell wall components, and synthesis of phytoalexins, or participate in the metabolism of ROS and RNS, both switching on the hypersensitive response (HR), a form of programmed host cell death at the infection site associated with limited pathogen development. The present review focuses on these plant defence reactions in which Prxs are directly or indirectly involved, and ends with the signalling pathways, which regulate Prx gene expression during plant defence. How they are integrated within the complex network of defence responses of any host plant cell will be the cornerstone of future research.

[* ]To whom correspondence should be addressed: amika@ 123456botanik.uni-hamburg.de
[†]

This paper is available online free of all access charges (see http://jxb.oxfordjournals.org/open_access.html for further details)