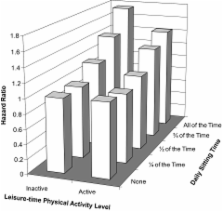 Physical fitness and all-cause mortality. A prospective study of healthy men and women.