Emotion Regulation through Movement: Unique Sets of Movement Characteristics are Associated with and Enhance Basic Emotions 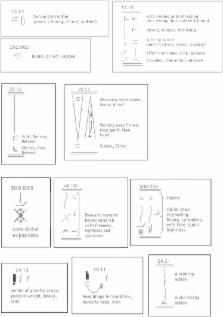 We have recently demonstrated that motor execution, observation, and imagery of movements expressing certain emotions can enhance corresponding affective states and therefore could be used for emotion regulation. But which specific movement(s) should one use in order to enhance each emotion? This study aimed to identify, using Laban Movement Analysis (LMA), the Laban motor elements (motor characteristics) that characterize movements whose execution enhances each of the basic emotions: anger, fear, happiness, and sadness. LMA provides a system of symbols describing its motor elements, which gives a written instruction (motif) for the execution of a movement or movement-sequence over time. Six senior LMA experts analyzed a validated set of video clips showing whole body dynamic expressions of anger, fear, happiness and sadness, and identified the motor elements that were common to (appeared in) all clips expressing the same emotion. For each emotion, we created motifs of different combinations of the motor elements common to all clips of the same emotion. Eighty subjects from around the world read and moved those motifs, to identify the emotion evoked when moving each motif and to rate the intensity of the evoked emotion. All subjects together moved and rated 1241 motifs, which were produced from 29 different motor elements. Using logistic regression, we found a set of motor elements associated with each emotion which, when moved, predicted the feeling of that emotion. Each emotion was predicted by a unique set of motor elements and each motor element predicted only one emotion. Knowledge of which specific motor elements enhance specific emotions can enable emotional self-regulation through adding some desired motor qualities to one's personal everyday movements (rather than mimicking others' specific movements) and through decreasing motor behaviors which include elements that enhance negative emotions.

John T. Cacioppo,  Gary G. Berntson,  J R Priester (1993)
In the pain-flexor reflex, arm extension is temporally coupled with the onset of the unconditioned aversive stimulus, whereas flexion is associated with its offset; when retrieving desirable stimuli, arm flexion is more closely coupled temporally to the acquisition or consumption of the desired stimuli than arm extension. It was posited that these contingencies foster an association between arm flexion, in contrast to extension, and approach motivational orientations. Six experiments were conducted to examine this hypothesis. Ideographs presented during arm flexion were subsequently ranked more positively than ideographs presented during arm extension, but only when the Ss' task was to evaluate the ideographs when they were presented initially. Arm flexion and extension were also each found to have discernible attitudinal effects. These results suggest a possible role for nondeclarative memory in attitude formation.

Formidability and the logic of human anger.

John Tooby,  Scott Sell,  Leda Cosmides (2009)
Eleven predictions derived from the recalibrational theory of anger were tested. This theory proposes that anger is produced by a neurocognitive program engineered by natural selection to use bargaining tactics to resolve conflicts of interest in favor of the angry individual. The program is designed to orchestrate two interpersonal negotiating tactics (conditionally inflicting costs or conditionally withholding benefits) to incentivize the target of the anger to place greater weight on the welfare of the angry individual. Individuals with enhanced abilities to inflict costs (e.g., stronger individuals) or to confer benefits (e.g., attractive individuals) have a better bargaining position in conflicts; hence, it was predicted that such individuals will be more prone to anger, prevail more in conflicts of interest, and consider themselves entitled to better treatment. These predictions were confirmed. Consistent with an evolutionary analysis, the effect of strength on anger was greater for men and the effect of attractiveness on anger was greater for women. Also as predicted, stronger men had a greater history of fighting than weaker men, and more strongly endorsed the efficacy of force to resolve conflicts--both in interpersonal and international conflicts. The fact that stronger men favored greater use of military force in international conflicts provides evidence that the internal logic of the anger program reflects the ancestral payoffs characteristic of a small-scale social world rather than rational assessments of modern payoffs in large populations.

This article was submitted to Emotion Science, a section of the journal Frontiers in Psychology