Mapping the zoonotic niche of Ebola virus disease in Africa 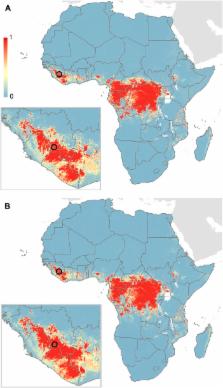 Ebola virus disease (EVD) is a complex zoonosis that is highly virulent in humans. The largest recorded outbreak of EVD is ongoing in West Africa, outside of its previously reported and predicted niche. We assembled location data on all recorded zoonotic transmission to humans and Ebola virus infection in bats and primates (1976–2014). Using species distribution models, these occurrence data were paired with environmental covariates to predict a zoonotic transmission niche covering 22 countries across Central and West Africa. Vegetation, elevation, temperature, evapotranspiration, and suspected reservoir bat distributions define this relationship. At-risk areas are inhabited by 22 million people; however, the rarity of human outbreaks emphasises the very low probability of transmission to humans. Increasing population sizes and international connectivity by air since the first detection of EVD in 1976 suggest that the dynamics of human-to-human secondary transmission in contemporary outbreaks will be very different to those of the past.

Since the first outbreaks of Ebola virus disease in 1976, there have been numerous other outbreaks in humans across Africa with fatality rates ranging from 50% to 90%. Humans can become infected with the Ebola virus after direct contact with blood or bodily fluids from an infected person or animal. The virus also infects and kills other primates—such as chimpanzees or gorillas—though Old World fruit bats are suspected to be the most likely carriers of the virus in the wild.

Pigott et al. have now updated predictions about where in Africa wild animals may harbour the virus and where the transmission of the virus from these animals to humans is possible. As such, the map identifies the regions that are most at risk of a future Ebola outbreak. The data behind these new maps include the locations of all recorded primary cases of Ebola in human populations—the ‘index’ cases—many of which have been linked to animal sources. The data also include the locations of recorded cases of Ebola virus infections in wild bats and primates from the last forty years. The maps, which were modelled using more flexible methods than previous predictions, also include new information—collected using satellites—about environmental factors and new predictions of the range of wild fruit bats.

Pigott et al. report that the transmission of Ebola virus from animals to humans is possible in 22 countries across Central and West Africa—and that 22 million people live in the areas at risk. However, outbreaks in human populations are rare and the likelihood of a human getting the disease from an infected animal still remains very low. The updated map does not include data about how infections spread from one person to another, so the next challenge is to use existing data on human-to-human transmission to better understand the likely size and extent of current and future outbreaks. As more people live in, and travel to and from, the at-risk regions than ever before, Pigott et al. note that new outbreaks of Ebola virus disease are likely to be very different to those of the past.

Disability-adjusted life years (DALYs) for 291 diseases and injuries in 21 regions, 1990-2010: a systematic analysis for the Global Burden of Disease Study 2010.

Christopher Murray,  Theo Vos,  Rafael Lozano … (2013)
Measuring disease and injury burden in populations requires a composite metric that captures both premature mortality and the prevalence and severity of ill-health. The 1990 Global Burden of Disease study proposed disability-adjusted life years (DALYs) to measure disease burden. No comprehensive update of disease burden worldwide incorporating a systematic reassessment of disease and injury-specific epidemiology has been done since the 1990 study. We aimed to calculate disease burden worldwide and for 21 regions for 1990, 2005, and 2010 with methods to enable meaningful comparisons over time. We calculated DALYs as the sum of years of life lost (YLLs) and years lived with disability (YLDs). DALYs were calculated for 291 causes, 20 age groups, both sexes, and for 187 countries, and aggregated to regional and global estimates of disease burden for three points in time with strictly comparable definitions and methods. YLLs were calculated from age-sex-country-time-specific estimates of mortality by cause, with death by standardised lost life expectancy at each age. YLDs were calculated as prevalence of 1160 disabling sequelae, by age, sex, and cause, and weighted by new disability weights for each health state. Neither YLLs nor YLDs were age-weighted or discounted. Uncertainty around cause-specific DALYs was calculated incorporating uncertainty in levels of all-cause mortality, cause-specific mortality, prevalence, and disability weights. Global DALYs remained stable from 1990 (2·503 billion) to 2010 (2·490 billion). Crude DALYs per 1000 decreased by 23% (472 per 1000 to 361 per 1000). An important shift has occurred in DALY composition with the contribution of deaths and disability among children (younger than 5 years of age) declining from 41% of global DALYs in 1990 to 25% in 2010. YLLs typically account for about half of disease burden in more developed regions (high-income Asia Pacific, western Europe, high-income North America, and Australasia), rising to over 80% of DALYs in sub-Saharan Africa. In 1990, 47% of DALYs worldwide were from communicable, maternal, neonatal, and nutritional disorders, 43% from non-communicable diseases, and 10% from injuries. By 2010, this had shifted to 35%, 54%, and 11%, respectively. Ischaemic heart disease was the leading cause of DALYs worldwide in 2010 (up from fourth rank in 1990, increasing by 29%), followed by lower respiratory infections (top rank in 1990; 44% decline in DALYs), stroke (fifth in 1990; 19% increase), diarrhoeal diseases (second in 1990; 51% decrease), and HIV/AIDS (33rd in 1990; 351% increase). Major depressive disorder increased from 15th to 11th rank (37% increase) and road injury from 12th to 10th rank (34% increase). Substantial heterogeneity exists in rankings of leading causes of disease burden among regions. Global disease burden has continued to shift away from communicable to non-communicable diseases and from premature death to years lived with disability. In sub-Saharan Africa, however, many communicable, maternal, neonatal, and nutritional disorders remain the dominant causes of disease burden. The rising burden from mental and behavioural disorders, musculoskeletal disorders, and diabetes will impose new challenges on health systems. Regional heterogeneity highlights the importance of understanding local burden of disease and setting goals and targets for the post-2015 agenda taking such patterns into account. Because of improved definitions, methods, and data, these results for 1990 and 2010 supersede all previously published Global Burden of Disease results. Bill & Melinda Gates Foundation. Copyright © 2012 Elsevier Ltd. All rights reserved.

Kate E. Jones,  Nikkita G Patel,  Marc A. Levy … (2008)
The next new disease Emerging infectious diseases are a major threat to health: AIDS, SARS, drug-resistant bacteria and Ebola virus are among the more recent examples. By identifying emerging disease 'hotspots', the thinking goes, it should be possible to spot health risks at an early stage and prepare containment strategies. An analysis of over 300 examples of disease emerging between 1940 and 2004 suggests that these hotspots can be accurately mapped based on socio-economic, environmental and ecological factors. The data show that the surveillance effort, and much current research spending, is concentrated in developed economies, yet the risk maps point to developing countries as the more likely source of new diseases. Supplementary information The online version of this article (doi:10.1038/nature06536) contains supplementary material, which is available to authorized users.