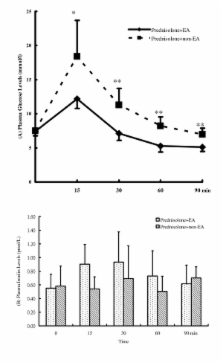 Insulin sensitivity has been enhanced by electroacupuncture (EA) in rats, but the EA phenomenon in an insulin resistant state is still unclear. This study reports the use of a large dose of prednisolone to evaluate the effects of EA in a state of insulin resistance.

The plasma levels of free fatty acids (FFAs) were estimated in steroid-background rats (SBRs) and compared with those in healthy rats treated with normal saline. In addition, plasma glucose and endogenous insulin levels were assayed to calculate the homeostasis model assessment (HOMA) index. Intravenous glucose tolerance test (IVGTT) was carried out to compare glucose tolerance. The SBRs were randomly divided into EA-treatment and non-EA treatment groups and 15-Hz EA was applied to the bilateral Zusanli acupoints to investigate its effects on insulin resistance. In addition to an insulin challenge test (ICT) and IVGTT, the plasma levels of FFAs were measured and western blot was performed to help determine the effects of EA on the insulin resistant state.

Insulin resistance was successfully induced by a large dose of prednisolone in male rats. This insulin resistance can be improved by 15 Hz EA at the bilateral Zusanli acupoints, as shown by decreased plasma levels of FFAs.

R DeFronzo,  E Ferrannini (1991)
Diabetes mellitus is commonly associated with systolic/diastolic hypertension, and a wealth of epidemiological data suggest that this association is independent of age and obesity. Much evidence indicates that the link between diabetes and essential hypertension is hyperinsulinemia. Thus, when hypertensive patients, whether obese or of normal body weight, are compared with age- and weight-matched normotensive control subjects, a heightened plasma insulin response to a glucose challenge is consistently found. A state of cellular resistance to insulin action subtends the observed hyperinsulinism. With the insulin/glucose-clamp technique, in combination with tracer glucose infusion and indirect calorimetry, it has been demonstrated that the insulin resistance of essential hypertension is located in peripheral tissues (muscle), is limited to nonoxidative pathways of glucose disposal (glycogen synthesis), and correlates directly with the severity of hypertension. The reasons for the association of insulin resistance and essential hypertension can be sought in at least four general types of mechanisms: Na+ retention, sympathetic nervous system overactivity, disturbed membrane ion transport, and proliferation of vascular smooth muscle cells. Physiological maneuvers, such as calorie restriction (in the overweight patient) and regular physical exercise, can improve tissue sensitivity to insulin; evidence indicates that these maneuvers can also lower blood pressure in both normotensive and hypertensive individuals. Insulin resistance and hyperinsulinemia are also associated with an atherogenic plasma lipid profile. Elevated plasma insulin concentrations enhance very-low-density lipoprotein (VLDL) synthesis, leading to hypertriglyceridemia. Progressive elimination of lipid and apolipoproteins from the VLDL particle leads to an increased formation of intermediate-density and low-density lipoproteins, both of which are atherogenic. Last, insulin, independent of its effects on blood pressure and plasma lipids, is known to be atherogenic. The hormone enhances cholesterol transport into arteriolar smooth muscle cells and increases endogenous lipid synthesis by these cells. Insulin also stimulates the proliferation of arteriolar smooth muscle cells, augments collagen synthesis in the vascular wall, increases the formation of and decreases the regression of lipid plaques, and stimulates the production of various growth factors. In summary, insulin resistance appears to be a syndrome that is associated with a clustering of metabolic disorders, including non-insulin-dependent diabetes mellitus, obesity, hypertension, lipid abnormalities, and atherosclerotic cardiovascular disease.

Doheon Lee,  Lucinda K. Bell,  K L Goodyear … (1999)
To examine the mechanism by which free fatty acids (FFAs) induce insulin resistance in vivo, awake chronically catheterized rats underwent a hyperinsulinemic-euglycemic clamp with or without a 5-h preinfusion of lipid/heparin to raise plasma FFA concentrations. Increased plasma FFAs resulted in insulin resistance as reflected by a approximately 35% reduction in the glucose infusion rate (P < 0.05 vs. control). The insulin resistance was associated with a 40-50% reduction in 13C nuclear magnetic resonance (NMR)-determined rates of muscle glycogen synthesis (P < 0.01 vs. control) and muscle glucose oxidation (P < 0.01 vs. control), which in turn could be attributed to a approximately 25% reduction in glucose transport activity as assessed by 2-[1,2-3H]deoxyglucose uptake in vivo (P < 0.05 vs. control). This lipid-induced decrease in insulin-stimulated muscle glucose metabolism was associated with 1) a approximately 50% reduction in insulin-stimulated insulin receptor substrate (IRS)-1-associated phosphatidylinositol (PI) 3-kinase activity (P < 0.05 vs. control), 2) a blunting in insulin-stimulated IRS-1 tyrosine phosphorylation (P < 0.05, lipid-infused versus glycerol-infused), and 3) a four-fold increase in membrane-bound, or active, protein kinase C (PKC) theta (P < 0.05 vs. control). We conclude that acute elevations of plasma FFA levels for 5 h induce skeletal muscle insulin resistance in vivo via a reduction in insulin-stimulated muscle glycogen synthesis and glucose oxidation that can be attributed to reduced glucose transport activity. These changes are associated with abnormalities in the insulin signaling cascade and may be mediated by FFA activation of PKC theta.