Transarterial Chemoembolization (TACE) plus Sorafenib Versus TACE for Intermediate or Advanced Stage Hepatocellular Carcinoma: A Meta-Analysis 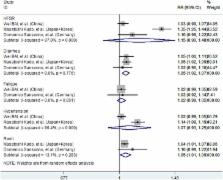 Pubmed and Embase databases were systematically reviewed for studies published up to November 2013, that compared TACE alone or in combination with sorafenib. Pooled hazard ratios (HRs) with 95% confidence intervals (95%CIs) were calculated for overall survival (OS), time to progression (TTP), objective response rate (ORR), and progression free survival (PFS) using random-effects or fixed-effects model, depending on the heterogeneity between the included studies.

The meta-analysis confirmed that the combination therapy of TACE plus sorafenib in patients with intermediate or advanced stage of HCC, can improve the OS, TTP, and ORR. This combination therapy was also associated with a significantly increased risk of adverse reactions.

Junji Furuse,  Hiromitsu Kumada,  Gerold Meinhardt … (2011)
In Japan and South Korea, transarterial chemoembolisation (TACE) is an important locoregional treatment for patients with unresectable hepatocellular carcinoma (HCC). Sorafenib, a multikinase inhibitor, has been shown effective and safe in patients with advanced HCC. This phase III trial assessed the efficacy and safety of sorafenib in Japanese and Korean patients with unresectable HCC who responded to TACE. Patients (n=458) with unresectable HCC, Child-Pugh class A cirrhosis and ≥25% tumour necrosis/shrinkage 1-3 months after 1 or 2 TACE sessions were randomised 1:1 to sorafenib 400mg bid or placebo and treated until progression/recurrence or unacceptable toxicity. Primary end-point was time to progression/recurrence (TTP). Secondary end-point was overall survival (OS). Baseline characteristics in the two groups were similar; >50% of patients started sorafenib>9 weeks after TACE. Median TTP in the sorafenib and placebo groups was 5.4 and 3.7 months, respectively (hazard ratio (HR), 0.87; 95% confidence interval (CI), 0.70-1.09; P=0.252). HR (sorafenib/placebo) for OS was 1.06 (95% CI, 0.69-1.64; P=0.790). Median daily dose of sorafenib was 386 mg, with 73% of patients having dose reductions and 91% having dose interruptions. Median administration of sorafenib and placebo was 17.1 and 20.1 weeks, respectively. No unexpected adverse events were observed. This trial, conducted prior to the reporting of registrational phase III trials, found that sorafenib did not significantly prolong TTP in patients who responded to TACE. This may have been due to delays in starting sorafenib after TACE and/or low daily sorafenib doses. Copyright © 2011 Elsevier Ltd. All rights reserved.

The unpredictability paradox: review of empirical comparisons of randomised and non-randomised clinical trials.

Anna Baldan,  Patrizia Burra,  L Girardi … (2008)
Although transcatheter arterial chemoembolization (TACE) is effective in hepatocellular carcinoma (HCC), it is not considered a curative procedure. Among the factors potentially interfering with its effectiveness is a hypothetical neoangiogenic reaction due to ischemia. In our study, we evaluated the changes in the levels of two angiogenic factors (vascular endothelial growth factor [VEGF] and basic fibroblast growth factor [b-FGF]) and one parameter of invasiveness (urokinase-type plasminogen activator [uPA]) in patients treated with TACE. Three blood samples were provided from 71 HCC patients undergoing TACE: before TACE (t0), after 3 days (t1), and after 4 wk, when they had spiral computed tomography (sCT) scanning (t2). The referring radiologists blindly evaluated tumor burden and vascularization at t0 and residual activity at t2. The choice of TACE as treatment was based on the American Association for the Study of Liver Diseases (AASLD) guidelines. Complete response at sCT was recorded in 27% of patients; mean survival was 35 months (confidence interval [CI] 31-40) and the 4-yr survival was 57%. VEGF levels were significantly correlated with the number of nodes and were higher in nonresponders at t2 (P = 0.01); below-median VEGF levels predicted a longer survival (P = 0.008). b-FGF correlated with VEGF, tumor size, vascularization, and residual activity, showing a borderline correlation with survival. uPA correlated with tumor size and VEGF. VEGF was singled out in the Cox multivariate analysis as an independent predictor of survival. When TACE is not totally effective, it may induce a significant neoangiogenetic reaction, as suggested by an increase in VEGF and b-FGF following treatment; this affects patient survival. VEGF emerges as the most reliable prognostic parameter, so it could be measured for judging TACE efficacy. Finally, antiangiogenic drugs may be indicated in TACE-treated HCC.