Minimal acupuncture is not a valid placebo control in randomised controlled trials of acupuncture: a physiologist's perspective 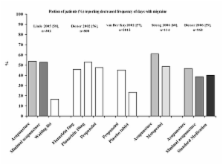 Zhi-Qi Zhao (2008)
Acupuncture has been accepted to effectively treat chronic pain by inserting needles into the specific "acupuncture points" (acupoints) on the patient's body. During the last decades, our understanding of how the brain processes acupuncture analgesia has undergone considerable development. Acupuncture analgesia is manifested only when the intricate feeling (soreness, numbness, heaviness and distension) of acupuncture in patients occurs following acupuncture manipulation. Manual acupuncture (MA) is the insertion of an acupuncture needle into acupoint followed by the twisting of the needle up and down by hand. In MA, all types of afferent fibers (Abeta, Adelta and C) are activated. In electrical acupuncture (EA), a stimulating current via the inserted needle is delivered to acupoints. Electrical current intense enough to excite Abeta- and part of Adelta-fibers can induce an analgesic effect. Acupuncture signals ascend mainly through the spinal ventrolateral funiculus to the brain. Many brain nuclei composing a complicated network are involved in processing acupuncture analgesia, including the nucleus raphe magnus (NRM), periaqueductal grey (PAG), locus coeruleus, arcuate nucleus (Arc), preoptic area, nucleus submedius, habenular nucleus, accumbens nucleus, caudate nucleus, septal area, amygdale, etc. Acupuncture analgesia is essentially a manifestation of integrative processes at different levels in the CNS between afferent impulses from pain regions and impulses from acupoints. In the last decade, profound studies on neural mechanisms underlying acupuncture analgesia predominately focus on cellular and molecular substrate and functional brain imaging and have developed rapidly. Diverse signal molecules contribute to mediating acupuncture analgesia, such as opioid peptides (mu-, delta- and kappa-receptors), glutamate (NMDA and AMPA/KA receptors), 5-hydroxytryptamine, and cholecystokinin octapeptide. Among these, the opioid peptides and their receptors in Arc-PAG-NRM-spinal dorsal horn pathway play a pivotal role in mediating acupuncture analgesia. The release of opioid peptides evoked by electroacupuncture is frequency-dependent. EA at 2 and 100Hz produces release of enkephalin and dynorphin in the spinal cord, respectively. CCK-8 antagonizes acupuncture analgesia. The individual differences of acupuncture analgesia are associated with inherited genetic factors and the density of CCK receptors. The brain regions associated with acupuncture analgesia identified in animal experiments were confirmed and further explored in the human brain by means of functional imaging. EA analgesia is likely associated with its counter-regulation to spinal glial activation. PTX-sesntive Gi/o protein- and MAP kinase-mediated signal pathways as well as the downstream events NF-kappaB, c-fos and c-jun play important roles in EA analgesia.

K Streitberger, J Kleinhenz (1998)
A problem acupuncture research has to face is the concept of a control group. If, in control groups, non-acupoint needling is done, physiological acupuncture effects are implied. Therefore the effects shown in this group are often close to those shown in the acupuncture group. In other trials, control groups have received obviously different treatments, such as transcutaneous electrical nervous stimulation or TENS-laser treatment; it is not clear if the effects of acupuncture are due only to the psychological effects of the treatment. We developed a placebo acupuncture needle, with which it should be possible to simulate an acupuncture procedure without penetrating the skin. In a cross-over experiment with 60 volunteers we tested whether needling with the placebo needle feels any different from real acupuncture. Of 60 volunteers, 54 felt a penetration with acupuncture (mean visual analogue scale [VAS] 13.4; SD 10.58) and 47 felt it with placebo (VAS 8.86; SD 10.55), 34 felt a dull pain sensation (DEQI) with acupuncture and 13 with placebo. None of the volunteers suspected that the needle may not have penetrated the skin. The placebo needle is sufficiently credible to be used in investigations of the effects of acupuncture.

Towards a theory of chronic pain.

A Vania Apkarian, Marwan N Baliki, Paul Y Geha (2009)
In this review, we integrate recent human and animal studies from the viewpoint of chronic pain. First, we briefly review the impact of chronic pain on society and address current pitfalls of its definition and clinical management. Second, we examine pain mechanisms via nociceptive information transmission cephalad and its impact and interaction with the cortex. Third, we present recent discoveries on the active role of the cortex in chronic pain, with findings indicating that the human cortex continuously reorganizes as it lives in chronic pain. We also introduce data emphasizing that distinct chronic pain conditions impact on the cortex in unique patterns. Fourth, animal studies regarding nociceptive transmission, recent evidence for supraspinal reorganization during pain, the necessity of descending modulation for maintenance of neuropathic behavior, and the impact of cortical manipulations on neuropathic pain is also reviewed. We further expound on the notion that chronic pain can be reformulated within the context of learning and memory, and demonstrate the relevance of the idea in the design of novel pharmacotherapies. Lastly, we integrate the human and animal data into a unified working model outlining the mechanism by which acute pain transitions into a chronic state. It incorporates knowledge of underlying brain structures and their reorganization, and also includes specific variations as a function of pain persistence and injury type, thereby providing mechanistic descriptions of several unique chronic pain conditions within a single model.