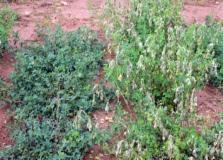 Understanding key adaptation traits is crucial to developing new cultivars with broad adaptations. The main objective of this research is to understand the genetic basis of winter hardiness (WH) and fall dormancy (FD) in alfalfa and the association between the two traits. QTL analysis was conducted in a pseudo-testcross F1 population developed from two cultivars contrasting in FD (3010 with FD = 2 and CW 1010 with FD = 10). The mapping population was evaluated in three replications at two locations (Watkinsville and Blairsville, GA). FD levels showed low to moderate correlations with WH (0.22–0.57). Assessing dormancy in winter is more reliable than in the fall in southern regions with warm winters. The mapping population was genotyped using Genotyping-by-sequencing (GBS). Single dose allele SNPs (SDA) were used for constructing linkage maps. The parental map (CW 1010) consisted of 32 linkage groups spanning 2127.5 cM with 1377 markers and an average marker density of 1.5 cM/SNP. The maternal map (3010) had 32 linkage groups spanning 2788.4 cM with 1837 SDA SNPs with an average marker density of 1.5 cM/SNP. Forty-five significant ( P < 0.05) QTLs for FD and 35 QTLs for WH were detected on both male and female linkage maps. More than 75% (22/28) of the dormancy QTL detected from the 3010 parent did not share genomic regions with WH QTLs and more than 70% (12/17) dormancy QTLs detected from CW 1010 parent were localized in different genomic regions than WH QTLs. These results suggest that the two traits have independent inheritance and therefore can be improved separately in breeding programs.

D Grattapaglia,  R. Sederoff (1994)
We have used a "two-way pseudo-testcross" mapping strategy in combination with the random amplified polymorphic DNA (RAPD) assay to construct two moderate density genetic linkage maps for species of Eucalyptus. In the cross between two heterozygous individuals many single-dose RAPD markers will be heterozygous in one parent, null in the other and therefore segregate 1:1 in their F1 progeny following a testcross configuration. Meiosis and gametic segregation in each individual can be directly and efficiently analyzed using RAPD markers. We screened 305 primers of arbitrary sequence, and selected 151 to amplify a total of 558 markers. These markers were grouped at LOD 5.0, theta = 0.25, resulting in the maternal Eucalyptus grandis map having a total of 240 markers into 14 linkage groups (1552 cM) and the paternal Eucalyptus urophylla map with 251 markers in 11 linkage groups (1101 cM) (n = 11 in Eucalyptus). Framework maps ordered with a likelihood support > or = 1000:1 were assembled covering 95% of the estimated genome size in both individuals. Characterization of genome complexity of a sample of 48 mapped random amplified polymorphic DNA (RAPD) markers indicate that 53% amplify from low copy regions. These are the first reported high coverage linkage maps for any species of Eucalyptus and among the first for any hardwood tree species. We propose the combined use of RAPD markers and the pseudo-testcross configuration as a general strategy for the construction of single individual genetic linkage maps in outbred forest trees as well as in any highly heterozygous sexually reproducing living organisms. A survey of the occurrence of RAPD markers in different individuals suggests that the pseudo-testcross/RAPD mapping strategy should also be efficient at the intraspecific level and increasingly so with crosses of genetically divergent individuals. The ability to quickly construct single-tree genetic linkage maps in any forest species opens the way for a shift from the paradigm of a species index map to the heterodox proposal of constructing several maps for individual trees of a population, therefore mitigating the problem of linkage equilibrium between marker and trait loci for the application of marker assisted strategies in tree breeding.

K Chekhovskiy,  John C Zwonitzer,  G May … (2004)
Expressed sequence tags (ESTs) are important resources for gene discovery and molecular marker development. From over 147,000 ESTs of Medicago truncatula, we have identified 4,384 ESTs containing perfect simple sequence repeats (EST-SSR) of di-, tri-, tetra- or pentanucleotides. Six hundred sixteen primer pairs (PPs) were designed and screened over a panel of eight genotypes representing six Medicago spp. and subspecies. Nearly, 74% (455) of the PPs produced characteristic SSR bands of expected size length in at least one Medicago species. Four hundred six (89%) of these 455 PPs produced SSR bands in all eight genotypes tested. Only 17 PPs were M. truncatula -specific. High levels of polymorphism (>70%) were detected for these markers in alfalfa, M. truncatula, and other annual medics. About 48% of the reported markers are part of gene transcripts linked to putative functions. Our results indicate that the SSR markers developed from M. truncatula ESTs are valuable genetic markers for the Medicago genus. These markers will be useful in establishing the genomic relationships of M. truncatula to important forage legume crops such as alfalfa and other annual medics.

This article was submitted to Evolutionary and Population Genetics, a section of the journal Frontiers in Plant Science