Global Patterns in Seasonal Activity of Influenza A/H3N2, A/H1N1, and B from 1997 to 2005: Viral Coexistence and Latitudinal Gradients 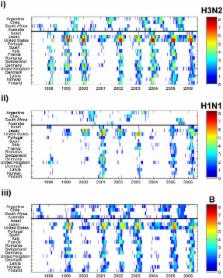 Despite a mass of research on the epidemiology of seasonal influenza, overall patterns of infection have not been fully described on broad geographic scales and for specific types and subtypes of the influenza virus. Here we provide a descriptive analysis of laboratory-confirmed influenza surveillance data by type and subtype (A/H3N2, A/H1N1, and B) for 19 temperate countries in the Northern and Southern hemispheres from 1997 to 2005, compiled from a public database maintained by WHO (FluNet). Key findings include patterns of large scale co-occurrence of influenza type A and B, interhemispheric synchrony for subtype A/H3N2, and latitudinal gradients in epidemic timing for type A. These findings highlight the need for more countries to conduct year-round viral surveillance and report reliable incidence data at the type and subtype level, especially in the Tropics.

Ottar N. Bjørnstad,  Rolf Ims,  Xavier Lambin (1999)
The search for mechanisms behind spatial population synchrony is currently a major issue in population ecology. Theoretical studies highlight how synchronizing mechanisms such as dispersal, regionally correlated climatic variables and mobile enemies might interact with local dynamics to produce different patterns of spatial covariance. Specialized statistical methods, applied to large-scale survey data, aid in testing the theoretical predictions with empirical estimates. Observational studies and experiments on the demography of local populations are paramount to identify the true ecological mechanisms. The recent achievements illustrate the power of combining theory, observation and/or experimentation and statistical modeling in the ecological research protocol.

Seasonality of influenza in Brazil: a traveling wave from the Amazon to the subtropics.

Joseph M A Miller,  Wladmir J. Alonso,  Cecile Viboud … (2007)
Influenza circulation and mortality impact in tropical areas have not been well characterized. The authors studied the seasonality of influenza throughout Brazil, a geographically diverse country, by modeling influenza-related mortality and laboratory surveillance data. Monthly time series of pneumonia and influenza mortality were obtained from 1979 to 2001 for each of the 27 Brazilian states. Detrended time series were analyzed by Fourier decomposition to describe the amplitude and timing of annual and semiannual epidemic cycles, and the resulting seasonal parameters were compared across latitudes, ranging from the equator (+5 degrees N) to the subtropics (-35 degrees S). Seasonality in mortality was most pronounced in southern states (winter epidemics, June-July), gradually attenuated toward central states (15 degrees S) (p < 0.001), and remained low near the equator. A seasonal southward traveling wave of influenza was identified across Brazil, originating from equatorial and low-population regions in March-April and moving toward temperate and highly populous regions over a 3-month period. Laboratory surveillance data from recent years provided independent confirmation that mortality peaks coincided with influenza virus activity. The direction of the traveling wave suggests that environmental forces (temperature, humidity) play a more important role than population factors (density, travel) in driving the timing of influenza epidemics across Brazil.

The global impact of influenza on morbidity and mortality.

Publisher ID: 07-PONE-RA-01714R1
DOI: 10.1371/journal.pone.0001296
PMC ID: 2117904
PubMed ID: 18074020
Copyright statement: This is an open-access article distributed under the terms of the Creative Commons Public Domain declaration which stipulates that, once placed in the public domain, this work may be freely reproduced, distributed, transmitted, modified, built upon, or otherwise used by anyone for any lawful purpose.