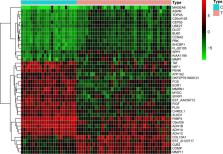 The compound traditional Chinese medicine Xihuang pill (XHP) has been adopted to treat breast cancer (BC) for centuries, but its specific mechanism of action is unclear.

The active ingredients and related targets of XHP were screened using the TCMSP and TCMID databases. GSE139038 was downloaded from the GEO database, and differentially expressed genes (DEGs) were analyzed. The intersection of targets and DEGs were chosen to build an ingredients–target genes network. Protein–protein interaction network construction and functional enrichment analysis of target genes were conducted.

A PPI network of 37 targets was constructed, and seven core nodes (FOS, MYC, JUN, PPARG, MMP9, PTGS2, SERPINE1) were identified. Functional enrichment analysis revealed that the aforementioned targets were mainly enriched in the IL-17, toll-like receptor, and tumor necrosis factor signaling pathways, which are deeply involved in the inflammatory microenvironment of tumors.

This network pharmacology study indicated that XHP can inhibit the development of BC by targeting a variety of proteins and signaling pathways involved in the inflammatory microenvironment.

Paul Shannon, Andrew Markiel, Owen Ozier … (2003)
Cytoscape is an open source software project for integrating biomolecular interaction networks with high-throughput expression data and other molecular states into a unified conceptual framework. Although applicable to any system of molecular components and interactions, Cytoscape is most powerful when used in conjunction with large databases of protein-protein, protein-DNA, and genetic interactions that are increasingly available for humans and model organisms. Cytoscape's software Core provides basic functionality to layout and query the network; to visually integrate the network with expression profiles, phenotypes, and other molecular states; and to link the network to databases of functional annotations. The Core is extensible through a straightforward plug-in architecture, allowing rapid development of additional computational analyses and features. Several case studies of Cytoscape plug-ins are surveyed, including a search for interaction pathways correlating with changes in gene expression, a study of protein complexes involved in cellular recovery to DNA damage, inference of a combined physical/functional interaction network for Halobacterium, and an interface to detailed stochastic/kinetic gene regulatory models.

Chia-Hao Chin, Shu-Hwa Chen, Hsin-Hung Wu … (2014)
Background Network is a useful way for presenting many types of biological data including protein-protein interactions, gene regulations, cellular pathways, and signal transductions. We can measure nodes by their network features to infer their importance in the network, and it can help us identify central elements of biological networks. Results We introduce a novel Cytoscape plugin cytoHubba for ranking nodes in a network by their network features. CytoHubba provides 11 topological analysis methods including Degree, Edge Percolated Component, Maximum Neighborhood Component, Density of Maximum Neighborhood Component, Maximal Clique Centrality and six centralities (Bottleneck, EcCentricity, Closeness, Radiality, Betweenness, and Stress) based on shortest paths. Among the eleven methods, the new proposed method, MCC, has a better performance on the precision of predicting essential proteins from the yeast PPI network. Conclusions CytoHubba provide a user-friendly interface to explore important nodes in biological networks. It computes all eleven methods in one stop shopping way. Besides, researchers are able to combine cytoHubba with and other plugins into a novel analysis scheme. The network and sub-networks caught by this topological analysis strategy will lead to new insights on essential regulatory networks and protein drug targets for experimental biologists. According to cytoscape plugin download statistics, the accumulated number of cytoHubba is around 6,700 times since 2010.