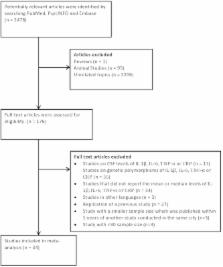 We carried out systematic review and meta-analysis to evaluate whether peripheral levels of pro-inflammatory markers including Interleukin-1 beta (IL-1β), Interleukin-6 (IL-6), Tumor Necrosis Factor-α (TNF- α) and C-Reactive Protein (CRP) are significantly higher in elderly with depression and Alzheimer’s disease. We searched Pubmed, PsycINFO and Embase, and thirty-four relevant studies (2609 with Depression, 1645 with Alzheimer’s disease and 14363 Controls) were included. Compared with controls, IL-1β (pooled standardized mean difference [SMD]: 0.642; 95% confidence interval [CI]: 0.078–1.206; significant heterogeneity: I 2 = 86.28%) and IL-6 (pooled SMD: 0.377; 95% CI: 0.156–0.598; significant heterogeneity: I 2 = 88.75%) were significantly elevated in depression. There was no difference in TNF-α (p = 0.351) and CRP (p = 0.05) between those with depression and controls. Compared with controls, IL-1β (pooled SMD: 1.37, 95% CI: 0.06–2.68, significant heterogeneity: I 2 = 96.01%) was significantly elevated in Alzheimer’s disease. There were no differences in IL-6 (p = 0.138), TNF-α (p = 0.451) and CRP (p = 0.07) between elderly with Alzheimer’s disease and controls. After Bonferroni adjustment, only IL-6 remained significantly higher in depression. Elderly with depression have higher IL-6 than controls, while those with Alzheimer’s disease did not have higher peripheral inflammatory markers.

Gene regulation and DNA damage in the ageing human brain.

Bruce A. Yankner,  Shyan-Yuan Kao,  Tao Lu … (2004)
The ageing of the human brain is a cause of cognitive decline in the elderly and the major risk factor for Alzheimer's disease. The time in life when brain ageing begins is undefined. Here we show that transcriptional profiling of the human frontal cortex from individuals ranging from 26 to 106 years of age defines a set of genes with reduced expression after age 40. These genes play central roles in synaptic plasticity, vesicular transport and mitochondrial function. This is followed by induction of stress response, antioxidant and DNA repair genes. DNA damage is markedly increased in the promoters of genes with reduced expression in the aged cortex. Moreover, these gene promoters are selectively damaged by oxidative stress in cultured human neurons, and show reduced base-excision DNA repair. Thus, DNA damage may reduce the expression of selectively vulnerable genes involved in learning, memory and neuronal survival, initiating a programme of brain ageing that starts early in adult life.

Gene-expression profile of the ageing brain in mice.

Richard Lee,  Jenq-Chang Lee,  Tomas A. Prolla … (2000)
Ageing of the brain leads to impairments in cognitive and motor skills, and is the major risk factor for several common neurological disorders such as Alzheimer disease (AD) and Parkinson disease (PD). Recent studies suggest that normal brain ageing is associated with subtle morphological and functional alterations in specific neuronal circuits, as opposed to large-scale neuronal loss. In fact, ageing of the central nervous system in diverse mammalian species shares many features, such as atrophy of pyramidal neurons, synaptic atrophy, decrease of striatal dopamine receptors, accumulation of fluorescent pigments, cytoskeletal abnormalities, and reactive astrocytes and microglia. To provide the first global analysis of brain ageing at the molecular level, we used oligonucleotide arrays representing 6,347 genes to determine the gene-expression profile of the ageing neocortex and cerebellum in mice. Ageing resulted in a gene-expression profile indicative of an inflammatory response, oxidative stress and reduced neurotrophic support in both brain regions. At the transcriptional level, brain ageing in mice displays parallels with human neurodegenerative disorders. Caloric restriction, which retards the ageing process in mammals, selectively attenuated the age-associated induction of genes encoding inflammatory and stress responses.