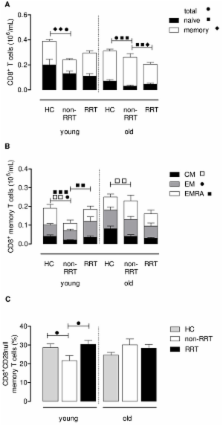 End-stage renal disease (ESRD) patients treated with renal replacement therapy (RRT) have premature immunologically aged T cells which may underlie uremia-associated immune dysfunction. The aim of this study was to investigate whether uremia was able to induce premature ageing of the T cell compartment. For this purpose, we examined the degree of premature immunological T cell ageing by examining the T cell differentiation status, thymic output via T cell receptor excision circle (TREC) content and proliferative history via relative telomere length in ESRD patients not on RRT.

K Schlüns,  William Kieper,  Leo Lefrancois … (2000)
The naïve and memory T lymphocyte pools are maintained through poorly understood homeostatic mechanisms that may include signaling via cytokine receptors. We show that interleukin-7 (IL-7) plays multiple roles in regulating homeostasis of CD8+ T cells. We found that IL-7 was required for homeostatic expansion of naïve CD8+ and CD4+ T cells in lymphopenic hosts and for CD8+ T cell survival in normal hosts. In contrast, IL-7 was not necessary for growth of CD8+ T cells in response to a virus infection but was critical for generating T cell memory. Up-regulation of Bcl-2 in the absence of IL-7 signaling was impaired after activation in vivo. Homeostatic proliferation of memory cells was also partially dependent on IL-7. These results point to IL-7 as a pivotal cytokine in T cell homeostasis.

Analyses and comparisons of telomerase activity and telomere length in human T and B cells: insights for epidemiology of telomere maintenance.

Cancer in patients on dialysis for end-stage renal disease: an international collaborative study.

G Buccianti,  A Lowenfels,  L Agodoa … (1999)
Previous studies have suggested that the frequency of cancer is higher in patients with end-stage renal disease (ESRD) than in the general population, but have not established whether this increase is confined to certain cancers or to certain categories of ESRD patients. The aim of this study was to examine the risk of cancer in a large cohort of patients treated by dialysis but not transplantation. We assembled a cohort of 831,804 patients who received dialysis during the period 1980-94 for ESRD in the USA, Europe, Australia, or New Zealand. We compared the observed frequency of cancer among these patients during 2,045,035 person-years of follow-up with the frequency of cancer in the respective background populations. During average follow-up of 2.5 years, 25,044 (3%) of 831,804 patients developed cancer compared with an expected number of 21,185 (standardised incidence ratio 1.18 [95% CI 1.17-1.20]). We observed a higher risk of cancer in patients younger than 35 years (3.68 [3.39-3.99]), and the risk gradually decreased with increasing age. High risks were observed for cancer of the kidney (3.60 [3.45-3.76]), bladder (1.50 [1.42-1.57]), and thyroid and other endocrine organs (2.28 [2.03-2.54]). Excess cancers appeared in several organs for which viruses have been suspected as causative agents, whereas cancers of the lung, colorectum, prostate, breast, and stomach were not consistently increased. The overall risk of cancer is increased in patients with ESRD, and the distribution of tumour types resembles the pattern seen after transplantation (although we have no data to make the comparison with skin cancer). The excess risk can largely be ascribed to effects of underlying renal or urinary-tract disease, or of loss of renal function, on the kidney and bladder, and to increased susceptibility to viral carcinogenesis. The relative risk, which is especially high in younger patients, gradually diminishes with age.