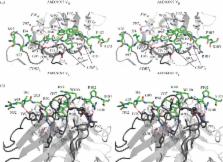 The glycoprotein sclerostin has been identified as a negative regulator of bone growth. It exerts its function by interacting with the Wnt co-receptor LRP5/6, blocks the binding of Wnt factors and thereby inhibits Wnt signalling. Neutralizing anti-sclerostin antibodies are able to restore Wnt activity and enhance bone growth thereby presenting a new osteoanabolic therapy approach for diseases such as osteoporosis. We have generated various Fab antibodies against human and murine sclerostin using a phage display set-up. Biochemical analyses have identified one Fab developed against murine sclerostin, AbD09097 that efficiently neutralizes sclerostin's Wnt inhibitory activity. In vitro interaction analysis using sclerostin variants revealed that this neutralizing Fab binds to sclerostin's flexible second loop, which has been shown to harbour the LRP5/6 binding motif. Affinity maturation was then applied to AbD09097, providing a set of improved neutralizing Fab antibodies which particularly bind human sclerostin with enhanced affinity. Determining the crystal structure of AbD09097 provides first insights into how this antibody might recognize and neutralize sclerostin. Together with the structure–function relationship derived from affinity maturation these new data will foster the rational design of new and highly efficient anti-sclerostin antibodies for the therapy of bone loss diseases such as osteoporosis.

WNT signaling in bone homeostasis and disease: from human mutations to treatments.

Roland Baron,  Michaela Kneissel (2013)
Low bone mass and strength lead to fragility fractures, for example, in elderly individuals affected by osteoporosis or children with osteogenesis imperfecta. A decade ago, rare human mutations affecting bone negatively (osteoporosis-pseudoglioma syndrome) or positively (high-bone mass phenotype, sclerosteosis and Van Buchem disease) have been identified and found to all reside in components of the canonical WNT signaling machinery. Mouse genetics confirmed the importance of canonical Wnt signaling in the regulation of bone homeostasis, with activation of the pathway leading to increased, and inhibition leading to decreased, bone mass and strength. The importance of WNT signaling for bone has also been highlighted since then in the general population in numerous genome-wide association studies. The pathway is now the target for therapeutic intervention to restore bone strength in millions of patients at risk for fracture. This paper reviews our current understanding of the mechanisms by which WNT signalng regulates bone homeostasis.

Stéphane Angers,  Randall Moon (2009)
The Wnt family of secreted ligands act through many receptors to stimulate distinct intracellular signalling pathways in embryonic development, in adults and in disease processes. Binding of Wnt to the Frizzled family of receptors and to low density lipoprotein receptor-related protein 5 (LRP5) or LRP6 co-receptors stimulates the intracellular Wnt-beta-catenin signalling pathway, which regulates beta-cateninstability and context-dependent transcription. This signalling pathway controls many processes, such as cell fate determination, cell proliferation and self-renewal of stem and progenitor cells. Intriguingly, the transmembrane receptor Tyr kinases Ror2 and Ryk, as well as Frizzledreceptors that act independently of LRP5 or LRP6, function as receptors for Wnt and activate beta-catenin-independent pathways. This leads to changes in cell movement and polarity and to the antagonism of the beta-catenin pathway.

Function and biological roles of the Dickkopf family of Wnt modulators.