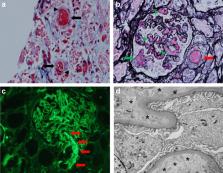 Thrombotic Microangiopathy and the Kidney

Vicky Brocklebank,  Katrina M. Wood,  David H. Kavanagh (2018)
Thrombotic microangiopathy can manifest in a diverse range of diseases and is characterized by thrombocytopenia, microangiopathic hemolytic anemia, and organ injury, including AKI. It can be associated with significant morbidity and mortality, but a systematic approach to investigation and prompt initiation of supportive management and, in some cases, effective specific treatment can result in good outcomes. This review considers the classification, pathology, epidemiology, characteristics, and pathogenesis of the thrombotic microangiopathies, and outlines a pragmatic approach to diagnosis and management.