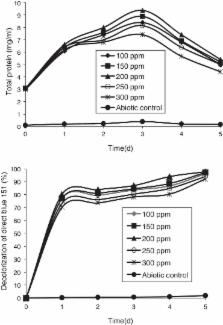 Remediation of dyes in textile effluent: a critical review on current treatment technologies with a proposed alternative.

Geoffrey McMullan,  David R. Marchant,  P Nigam … (2001)
The control of water pollution has become of increasing importance in recent years. The release of dyes into the environment constitutes only a small proportion of water pollution, but dyes are visible in small quantities due to their brilliance. Tightening government legislation is forcing textile industries to treat their waste effluent to an increasingly high standard. Currently, removal of dyes from effluents is by physio-chemical means. Such methods are often very costly and although the dyes are removed, accumulation of concentrated sludge creates a disposal problem. There is a need to find alternative treatments that are effective in removing dyes from large volumes of effluents and are low in cost, such as biological or combination systems. This article reviews the current available technologies and suggests an effective, cheaper alternative for dye removal and decolourisation applicable on large scale.

C Kalyani,  Sanjay Govindwar,  Irene J. Chang … (2009)
A developed consortium-GR, consisting of Proteus vulgaris NCIM-2027 (PV) and Micrococcus glutamicus NCIM-2168 (MG), completely decolorized an azo dye Scarlet R under static anoxic condition with an average decolorization rate of 16,666 microg h(-1); which is much faster than that of the pure cultures (PV, 3571 microg h(-1); MG, 2500 microg h(-1)). Consortium-GR gave best decolorization performance with nearly complete mineralization of Scarlet R (over 90% TOC and COD reduction) within 3h, much shorter relative to the individual strains. Induction in the riboflavin reductase and NADH-DCIP reductase was observed in the consortium, suggesting the involvement of these enzymes during the fast decolorization process. The FTIR and GC-MS analysis showed that 1,4-benzenediamine was formed during decolorization/degradation of Scarlet R by consortium-GR. Phytotoxicity studies revealed no toxicity of the biodegraded products of Scarlet R by consortium-GR. In addition, consortium-GR applied for mixture of industrial dyes showed 88% decolorization under static condition with significant reduction in TOC (62%) and COD (68%) within 72 h, suggesting potential application of this microbial consortium in bioremediation of dye-containing wastewater.

Reduction of azo food dyes in cultures of Proteus vulgaris.

P Dubin,  Ann K. Wright (1975)
1. Rates of reduction of a number of azo food dyes were measured in anaerobic cultures of Proteus vulgaris. The rates of colour loss were found to be zero order under conditions in which the concentration of viable cells remained constant. 2. A significant increase in the rate of reduction followed the onset of cell mortality. 3. The zero-order rates correlate with the redox potentials of the dyes. A mechanism consistent with these observations involes an extracellular non-enzymic reducing agent which acts as an electron shuttle between dye and cellular reducing enzymes.