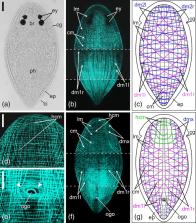 We analyzed the adult musculature of two prolecithophoran species, Cylindrostoma monotrochum (von Graff, 1882) and Monoophorum striatum (von Graff, 1878) using a phalloidin‐rhodamine technique. As in all rhabdithophoran flatworms, the body‐wall musculature consisted of three muscle layers: on the outer side was a layer of circular muscle fibers and on the inner side was a layer of longitudinal muscle fibers; between them were two different types of diagonally orientated fibers, which is unusual for flatworms. The musculature of the pharynx consisted of a basket‐shaped grid of thin longitudinal and circular fibers. Thick anchoring muscle fibers forming a petal‐like shape connected the proximal parts of the pharynx with the body‐wall musculature. Male genital organs consisted of paired seminal vesicles, a granular vesicle, and an invaginated penis. Peculiar ring‐shaped muscles were only found in M. striatum, predominantly in the anterior body part. In the same species, seminal vesicles and penis only had circular musculature, while in C. monotrochum also longitudinal musculature was found in these organs. Female genital organs were only present in M. striatum, where we characterized a vagina interna, and a bursa seminalis. Transverse, crossover, and dorsoventral muscle fibers were lacking in the middle of the body and greatly varied in number and position in both species.

Kelly Ross,  Kerilyn C Omuro,  Matthew R. G. Taylor … (2015)
Background Planarians are an attractive model organism for studying stem cell-based regeneration due to their ability to replace all of their tissues from a population of adult stem cells. The molecular toolkit for planarian studies currently includes the ability to study gene function using RNA interference (RNAi) and observe gene expression via in situ hybridizations. However, there are few antibodies available to visualize protein expression, which would greatly enhance analysis of RNAi experiments as well as allow further characterization of planarian cell populations using immunocytochemistry and other immunological techniques. Thus, additional, easy-to-use, and widely available monoclonal antibodies would be advantageous to study regeneration in planarians. Results We have created seven monoclonal antibodies by inoculating mice with formaldehyde-fixed cells isolated from dissociated 3-day regeneration blastemas. These monoclonal antibodies can be used to label muscle fibers, axonal projections in the central and peripheral nervous systems, two populations of intestinal cells, ciliated cells, a subset of neoblast progeny, and discrete cells within the central nervous system as well as the regeneration blastema. We have tested these antibodies using eight variations of a formaldehyde-based fixation protocol and determined reliable protocols for immunolabeling whole planarians with each antibody. We found that labeling efficiency for each antibody varies greatly depending on the addition or removal of tissue processing steps that are used for in situ hybridization or immunolabeling techniques. Our experiments show that a subset of the antibodies can be used alongside markers commonly used in planarian research, including anti-SYNAPSIN and anti-SMEDWI, or following whole-mount in situ hybridization experiments. Conclusions The monoclonal antibodies described in this paper will be a valuable resource for planarian research. These antibodies have the potential to be used to better understand planarian biology and to characterize phenotypes following RNAi experiments. In addition, we present alterations to fixation protocols and demonstrate how these changes can increase the labeling efficiencies of antibodies used to stain whole planarians. Electronic supplementary material The online version of this article (doi:10.1186/s12861-014-0050-9) contains supplementary material, which is available to authorized users.

Evolution of body-wall musculature in the Platyhelminthes (Acoelomorpha, Catenulida, Rhabditophora).

M Hooge (2001)
In an effort to understand the phylogeny of the Platyhelminthes, the patterns of body-wall musculature of flatworms were studied using fluorescence microscopy and Alexa-488-labeled phalloidin. Species of the Catenulida have a simple orthogonal gridwork of longitudinal and circular muscles. Members of the Rhabditophora have the same gridwork of musculature, but also have diagonal muscles over their entire body. Although a few species of Acoelomorpha possessed a simple orthogonal grid of musculature, most species typically have distinctly different patterns of dorsal and ventral body-wall musculature that include sets of longitudinal, circular, U-shaped, and several kinds of diagonal muscles. Several distinct patterns of musculature were identified, including 8 patterns in 11 families of acoels. These patterns have proven to be useful in clarifying the phylogeny of the Acoelomorpha, particularly with regard to the higher acoels. Patterns of musculature as well as other morphological characters are used here for revisions of acoel systematics, including the return of Eumecynostomum sanguineum (Mecynostomidae) to the genus Aphanostoma (Convolutidae), the revision of the family Childiidae, and the formation of a new family, Actinoposthiidae. Copyright 2001 Wiley-Liss, Inc.

Phylogeny of the Prolecithophora (Platyhelminthes) Inferred from 18S rDNA Sequences