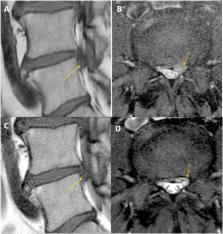 Most patients with acute low back pain (LBP), with or without radiculopathy, have substantial improvements in pain and function in the first 4 weeks, and they do not require routine imaging. Imaging is considered in those patients who have had up to 6 weeks of medical management and physical therapy that resulted in little or no improvement in their LBP. It is also considered for those patients presenting with suspicion for serious underlying conditions, such as cauda equina syndrome, malignancy, fracture and infection. In western country primary care settings, the prevalence has been suggested to be 0.7% for metastatic cancer, 0.01% for spinal infection and 0.04% for cauda equina syndrome. Of the small proportion of patients with any of these conditions, almost all have an identifiable risk factor. Osteoporotic vertebral compression fractures (4%) and inflammatory spine disease (<5%) may cause LBP, but these conditions typically carry lower diagnostic urgency. Imaging is an important driver of LBP care costs, not only because of the direct costs of the test procedures but also because of the downstream effects. Unnecessary imaging can lead to additional tests, follow-up, referrals and may result in an invasive procedure of limited or questionable benefit. Imaging should be delayed for 6 weeks in patients with nonspecific LBP without reasonable suspicion for serious disease.

The translational potential of this article: Diagnostic imaging studies should be performed only in patients who have severe or progressive neurologic deficits or are suspected of having a serious or specific underlying condition. Radiologists can play a critical role in decision support related to appropriateness of imaging requests, and accurately reporting the potential clinical significance or insignificance of imaging findings.

Chapter 3. European guidelines for the management of acute nonspecific low back pain in primary care.

Acute low back pain: systematic review of its prognosis.

Liset Pengel,  Kathryn Refshauge,  C Maher … (2003)
To describe the course of acute low back pain and sciatica and to identify clinically important prognostic factors for these conditions. Systematic review. Searches of Medline, Embase, Cinahl, and Science Citation Index and iterative searches of bibliographies. Pain, disability, and return to work. 15 studies of variable methodological quality were included. Rapid improvements in pain (mean reduction 58% of initial scores), disability (58%), and return to work (82% of those initially off work) occurred in one month. Further improvement was apparent until about three months. Thereafter levels for pain, disability, and return to work remained almost constant. 73% of patients had at least one recurrence within 12 months. People with acute low back pain and associated disability usually improve rapidly within weeks. None the less, pain and disability are typically ongoing, and recurrences are common.