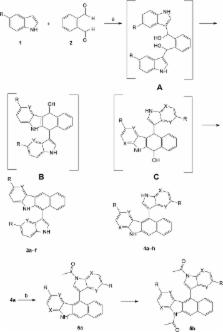 Resistance developments against established antibiotics are an emerging problem for antibacterial therapies. Infections with Staphylococcus aureus and methicillin-resistant S. aureus (MRSA) have become more difficult to treat with standard antibiotics that often fail, especially against MRSA. In consequence, novel antibiotics are urgently needed. Antibiotics from natural sources own complicated structures that cause difficulties for a chemical synthetic production. We developed novel small-molecule antibacterials that are easily accessible in a simple one-pot synthesis. The central indolonaphthalene core is substituted with indole residues at various positions. Both the varied indole substitutions and their positions at the molecular scaffold influence the determined antibacterial activity against the evaluated Staphylococcus strains. Best activities have been found for 5-chloro, -cyano, and -hydroxyl indole substitutions. Therefore, first promising lead compounds could be identified that are nontoxic in human HEK and SH-SY5Y cells and exceed the activity of used standard antibiotics, especially against MRSA.

Repair of global regulators in Staphylococcus aureus 8325 and comparative analysis with other clinical isolates.

Dirk Albrecht,  Knut Ohlsen,  Tina Schäfer … (2010)
The pathogenicity of Staphylococcus aureus strains varies tremendously (as seen with animals). It is largely dependent on global regulators, which control the production of toxins, virulence, and fitness factors. Despite the vast knowledge of staphylococcal molecular genetics, there is still widespread dispute over what factors must come together to make a strain highly virulent. S. aureus NCTC8325 (RN1 and derivatives) is a widely used model strain for which an incomparable wealth of knowledge has accumulated in the almost 50 years since its isolation. Although RN1 has functional agr, sarA, and sae global regulators, it is defective in two regulatory genes, rsbU (a positive activator of SigB) and tcaR (an activator of protein A transcription), and is therefore considered by many to be a poor model for studies of regulation and virulence. Here, we repaired these genes and compared the resulting RN1 derivatives with other widely used strains, Newman, USA300, UAMS-1, and COL, plus the parental RN1, with respect to growth, extracellular protein pattern, hemolytic activity, protein A production, pigmentation, biofilm formation, and mouse lethality. The tcaR-repaired strain, showed little alteration in these properties. However, the rsbU-repaired strain was profoundly altered. Hemolytic activity was largely decreased, the exoprotein pattern became much more similar to that of typical wild-type (wt) S. aureus, and there was a surprising increase in mouse lethality. We note that each of the strains tested has a mutational alteration in one or more other regulatory functions, and we conclude that the repaired RN1 is a good model strain for studies of staphylococcal regulation and pathobiology; although strain Newman has been used extensively for such studies in recent years, it has a missense mutation in saeS, the histidine kinase component of the sae signaling module, which profoundly alters its regulatory phenotype. If this mutation were repaired, Newman would be considerably improved as a model strain.

Update on the antibiotic resistance crisis.

Patrizia Pecile,  Simona Pollini,  Fabio Arena … (2014)
Antibiotics tend to lose their efficacy over time due to the emergence and dissemination of resistance among bacterial pathogens. Strains with resistance to multiple antibiotic classes have emerged among major Gram-positive and Gram-negative species including Staphylococcus aureus, Enterococcus spp., Pseudomonas aeruginosa, Acinetobacter spp. Enterobacteriaceae, and Neisseria gonorrhoeae. With some Gram-negatives, resistance may involve most or even all the available antimicrobial options, resulting in extremely drug-resistant or totally drug-resistant phenotypes. This so-called 'antibiotic resistance crisis' has been compounded by the lagging in antibiotic discovery and development programs occurred in recent years, and is jeopardizing the essential role played by antibiotics in current medical practices. Copyright © 2014 Elsevier Ltd. All rights reserved.