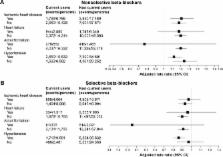 There is conflicting information regarding the effects of selective and nonselective beta-blocker treatment in patients with COPD.

This nested case–control study used the Taiwan National Health Insurance Research Database. We included COPD patients who used inhalation steroid and beta-blockers between 1998 and 2010. From this cohort, there were 16,067 patients with severe exacerbations included in the analysis and 55,970 controls matched on age, sex, COPD diagnosis year, and beta-blockers treatment duration by risk set sampling.

Effect of beta-blockade on mortality among high-risk and low-risk patients after myocardial infarction.

Philip Short,  Samuel Lipworth,  Douglas H J Elder … (2011)
Objective To examine the effect of β blockers in the management of chronic obstructive pulmonary disease (COPD), assessing their effect on mortality, hospital admissions, and exacerbations of COPD when added to established treatment for COPD. Design Retrospective cohort study using a disease specific database of COPD patients (TARDIS) linked to the Scottish morbidity records of acute hospital admissions, the Tayside community pharmacy prescription records, and the General Register Office for Scotland death registry. Setting Tayside, Scotland (2001–2010) Population 5977 patients aged >50 years with a diagnosis of COPD. Main outcome measures Hazard ratios for all cause mortality, emergency oral corticosteroid use, and respiratory related hospital admissions calculated through Cox proportional hazard regression after correction for influential covariates. Results Mean follow-up was 4.35 years, mean age at diagnosis was 69.1 years, and 88% of β blockers used were cardioselective. There was a 22% overall reduction in all cause mortality with β blocker use. Furthermore, there were additive benefits of β blockers on all cause mortality at all treatment steps for COPD. Compared with controls (given only inhaled therapy with either short acting β agonists or short acting antimuscarinics), the adjusted hazard ratio for all cause mortality was 0.28 (95% CI 0.21 to 0.39) for treatment with inhaled corticosteroid, long acting β agonist, and long acting antimuscarinic plus β blocker versus 0.43 (0.38 to 0.48) without β blocker. There were similar trends showing additive benefits of β blockers in reducing oral corticosteroid use and hospital admissions due to respiratory disease. β blockers had no deleterious impact on lung function at all treatment steps when given in conjunction with either a long acting β agonist or antimuscarinic agent Conclusions β blockers may reduce mortality and COPD exacerbations when added to established inhaled stepwise therapy for COPD, independently of overt cardiovascular disease and cardiac drugs, and without adverse effects on pulmonary function.

Beta-Blockers Reduced the Risk of Mortality and Exacerbation in Patients with COPD: A Meta-Analysis of Observational Studies