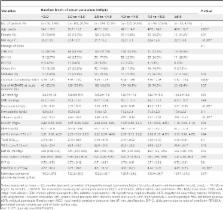 Abnormal serum potassium is associated with an increased risk of mortality in dialysis patients. However, the impacts of serum potassium levels on short- and long-term mortality and association of potassium variability with death in peritoneal dialysis (PD) patients are uncertain.

Serum and dialysate potassium concentrations and survival in hemodialysis patients.

A strategy for modelling the effect of a continuous covariate in medicine and epidemiology.

P Royston (2000)
Low-dimensional parametric models are well understood, straightforward to communicate to other workers, have very smooth curves and may easily be checked for consistency with background scientific knowledge or understanding. They should therefore be ideal tools with which to represent smooth relationships between a continuous predictor and an outcome variable in medicine and epidemiology. Unfortunately, a seriously restricted set of such models is used routinely in practical data analysis - typically, linear, quadratic or occasionally cubic polynomials, or sometimes a power or logarithmic transformation of a covariate. Since their flexibility is limited, it is not surprising that the fit of such models is often poor. Royston and Altman's recent work on fractional polynomials has extended the range of available functions. It is clearly crucial that the chosen final model fits the data well. Achieving a good fit with minimal restriction on the functional form has been the motivation behind the major recent research effort on non-parametric curve-fitting techniques. Here I propose that one such model, a (possibly over-fitted) cubic smoothing spline, may be used to define a suitable reference curve against which the fit of a parametric model may be checked. I suggest a significance test for the purpose and examine its type I error and power in a small simulation study. Several families of parametric models, including some with sigmoid curves, are considered. Their suitability in fitting regression relationships found in several real data sets is investigated. With all the example data sets, a simple parametric model can be found which fits the data approximately as well as a cubic smoothing spline, but without the latter's tendency towards artefacts in the fitted curve. Copyright 2000 John Wiley & Sons, Ltd.

This work was supported by grants from the National Key Technology Research and Development Program of the Ministry of Science and Technology of China (No. 2011BAI10B05), the National Science Fund for Distinguished Young Scholars of China (No. 30925019), 5010 Clinical Program of Sun Yat-sen University (No. 2007007) and the Guangzhou Committee of Science and Technology of China (No. 2010U1-E00831). The funders had no role in study design, data collection and analysis, decision to publish, or preparation of the manuscript.