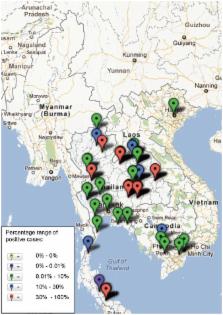 An increasing use of point of care diagnostic tests that exclude malaria, coupled with a declining malaria burden in many endemic countries, is highlighting the lack of ability of many health systems to manage other causes of febrile disease. A lack of knowledge of distribution of these pathogens, and a lack of screening and point-of-care diagnostics to identify them, prevents effective management of these generally treatable contributors to disease burden. While prospective data collection is vital, an untapped body of knowledge already exists in the published health literature.

Focusing on the Mekong region of Southeast Asia, published data from 1986 to 2011 was screened to for frequency of isolation of pathogens implicated in aetiology of non-malarial febrile illness. Eligibility criteria included English-language peer-reviewed studies recording major pathogens for which specific management is likely to be warranted. Of 1,252 identified papers, 146 met inclusion criteria and were analyzed and data mapped.

This mapping demonstrates a very heterogeneous distribution of information on the causes of fever in the Mekong countries. Further directed data collection to address gaps in the evidence-base, and expansion to a global database of pathogen distribution, is readily achievable, and would help define wider priorities for research and development to improve syndromic management of fever, prioritize diagnostic development, and guide empirical therapy.

Estimating the Global Clinical Burden of Plasmodium falciparum Malaria in 2007

A Research Agenda for Malaria Eradication: Diagnoses and Diagnostics

The threat of artemisinin-resistant malaria.