A childhood case of spinal tuberculosis misdiagnosed as muscular dystrophy 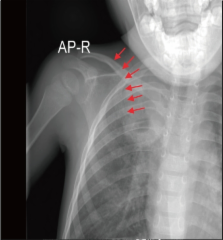 Tuberculosis is primarily a pulmonary disease, but extra-pulmonary manifestations are not uncommon, especially in children and adolescents. Ten percent of extra pulmonary tuberculosis localizes to the bones and joints, and 56% of such cases affect the spine. We treated a childhood case of spinal tuberculosis misdiagnosed as muscular dystrophy in a patient without specific constitutional symptoms. We report this case because the patient had an unusual presentation of spinal tuberculosis.

The growing burden of tuberculosis: global trends and interactions with the HIV epidemic.

B. Williams,  Neff Walker,  Aaron G B Williams … (2003)
The increasing global burden of tuberculosis (TB) is linked to human immunodeficiency virus (HIV) infection. We reviewed data from notifications of TB cases, cohort treatment outcomes, surveys of Mycobacterium tuberculosis infection, and HIV prevalence in patients with TB and other subgroups. Information was collated from published literature and databases held by the World Health Organization (WHO), the Joint United Nations Programme on HIV/Acquired Immunodeficiency Syndrome (UNAIDS), the US Census Bureau, and the US Centers for Disease Control and Prevention. There were an estimated 8.3 million (5th-95th centiles, 7.3-9.2 million) new TB cases in 2000 (137/100,000 population; range, 121/100,000-151/100,000). Tuberculosis incidence rates were highest in the WHO African Region (290/100,000 per year; range, 265/100,000-331/100,000), as was the annual rate of increase in the number of cases (6%). Nine percent (7%-12%) of all new TB cases in adults (aged 15-49 years) were attributable to HIV infection, but the proportion was much greater in the WHO African Region (31%) and some industrialized countries, notably the United States (26%). There were an estimated 1.8 million (5th-95th centiles, 1.6-2.2 million) deaths from TB, of which 12% (226 000) were attributable to HIV. Tuberculosis was the cause of 11% of all adult AIDS deaths. The prevalence of M tuberculosis-HIV coinfection in adults was 0.36% (11 million people). Coinfection prevalence rates equaled or exceeded 5% in 8 African countries. In South Africa alone there were 2 million coinfected adults. The HIV pandemic presents a massive challenge to global TB control. The prevention of HIV and TB, the extension of WHO DOTS programs, and a focused effort to control HIV-related TB in areas of high HIV prevalence are matters of great urgency.

C A Perucci,  A Faustini,  Deborah A. Hall (2006)
The resurgence of tuberculosis (TB) in western countries has been attributed to the HIV epidemic, immigration, and drug resistance. Multidrug resistant tuberculosis (MDR-TB) is caused by the transmission of multidrug resistant Mycobacterium tuberculosis strains in new cases, or by the selection of single drug resistant strains induced by previous treatment. The aim of this report is to determine risk factors for MDR-TB in Europe. A systematic review was conducted of published reports of risk factors associated with MDR-TB in Europe. Meta-analysis, meta-regression, and sub-grouping were used to pool risk estimates of MDR-TB and to analyse associations with age, sex, immigrant status, HIV status, occurrence year, study design, and area of Europe. Twenty nine papers were eligible for the review from 123 identified in the search. The pooled risk of MDR-TB was 10.23 times higher in previously treated than in never treated cases, with wide heterogeneity between studies. Study design and geographical area were associated with MDR-TB risk estimates in previously treated patients; the risk estimates were higher in cohort studies carried out in western Europe (RR 12.63; 95% CI 8.20 to 19.45) than in eastern Europe (RR 8.53; 95% CI 6.57 to 11.06). National estimates were possible for six countries. MDR-TB cases were more likely to be foreign born (odds ratio (OR) 2.46; 95% CI 1.86 to 3.24), younger than 65 years (OR 2.53; 95% CI 1.74 to 4.83), male (OR 1.38; 95% CI 1.16 to 1.65), and HIV positive (OR 3.52; 95% CI 2.48 to 5.01). Previous treatment was the strongest determinant of MDR-TB in Europe. Detailed study of the reasons for inadequate treatment could improve control strategies. The risk of MDR-TB in foreign born people needs to be re-evaluated, taking into account any previous treatment.

Tuberculosis of bones and joints.

This is an open-access article distributed under the terms of the Creative Commons Attribution Non-Commercial License (http://creativecommons.org/licenses/by-nc/3.0/) which permits unrestricted non-commercial use, distribution, and reproduction in any medium, provided the original work is properly cited.