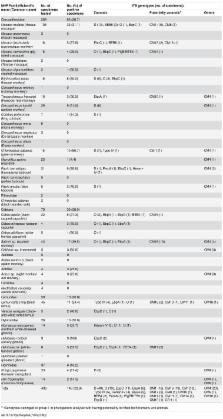 Monica Santin,  Ronald Fayer (2011)
Microsporidia are a ubiquitous group of obligate intracellular parasites that infect all major animal groups. Enterocytozoon bieneusi is the most commonly identified Microsporidia in humans and has also been reported worldwide in animals with importance in veterinary medicine (e.g., cats, dogs, horses, cattle and pigs). The identification of E. bieneusi in animals has raised the question of the importance of animal reservoirs in the epidemiology of this pathogen, and the implications of the infection with this pathogen in infected animals. Considerable genetic diversity within E. bieneusi has been found with over 90 genotypes identified based on the ITS nucleotide sequence of E. bieneusi spores recovered from the feces of infected humans and animals. Both host-adapted E. bieneusi genotypes with narrow host ranges and potentially zoonotic genotypes with wide host specificity have been identified. The information presented in this review should be useful in understanding the taxonomy, epidemiology, zoonotic potential, and importance in public health of E. bieneusi. Published by Elsevier India Pvt Ltd.

Na Li,  Lihua Xiao,  Lin Wang … (2012)
Background Despite their wide occurrence, cryptosporidiosis and giardiasis are considered neglected diseases by the World Health Organization. The epidemiology of these diseases and microsporidiosis in humans in developing countries is poorly understood. The high concentration of pathogens in raw sewage makes the characterization of the transmission of these pathogens simple through the genotype and subtype analysis of a small number of samples. Methodology/Principal Findings The distribution of genotypes and subtypes of Cryptosporidium spp., Giardia duodenalis, and Enterocytozoon bieneusi in 386 samples of combined sewer systems from Shanghai, Nanjing and Wuhan and the sewer system in Qingdao in China was determined using PCR-sequencing tools. Eimeria spp. were also genotyped to assess the contribution of domestic animals to Cryptosporidium spp., G. duodenalis, and E. bieneusi in wastewater. The high occurrence of Cryptosporidium spp. (56.2%), G. duodenalis (82.6%), E. bieneusi (87.6%), and Eimeria/Cyclospora (80.3%) made the source attribution possible. As expected, several human-pathogenic species/genotypes, including Cryptosporidium hominis, Cryptosporidium meleagridis, G. duodenalis sub-assemblage A-II, and E. bieneusi genotype D, were the dominant parasites in wastewater. In addition to humans, the common presence of Cryptosporidium spp. and Eimeria spp. from rodents indicated that rodents might have contributed to the occurrence of E. bieneusi genotype D in samples. Likewise, the finding of Eimeria spp. and Cryptosporidium baileyi from birds indicated that C. meleagridis might be of both human and bird origins. Conclusions/Significance The distribution of Cryptosporidium species, G. duodenalis genotypes and subtypes, and E. bieneusi genotypes in urban wastewater indicates that anthroponotic transmission appeared to be important in epidemiology of cryptosporidiosis, giardiasis, and microsporidiosis in the study areas. The finding of different distributions of subtypes between Shanghai and Wuhan was indicative of possible differences in the source of C. hominis among different areas in China.

This study was supported in part by Innovation Scientists and Technicians Troop Construction Projects of Henan Province (134200510012, http://www.hnkjt.gov.cn/new/index.eiip), the State Key Program of National Natural Science Foundation of China (No. 31330079, http://npd.nsfc.gov.cn/), the Key National Science and Technology Specific Projects (No. 2012ZX10004220, http://www.nmp.gov.cn/), the Program for Science and Technology Innovative Research Team in University of Henan Province (012IRTSTHN005, http://est.haedu.gov.cn/Article/). The funders had no role in study design, data collection and analysis, decision to publish, or preparation of the manuscript.