A new species of the genus Pareas (Squamata, Pareidae) from Yunnan, China 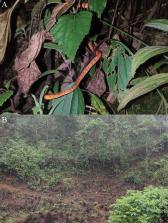 Sudhir Kumar, Glen Stecher, Koichiro Tamura (2016)
We present the latest version of the Molecular Evolutionary Genetics Analysis (Mega) software, which contains many sophisticated methods and tools for phylogenomics and phylomedicine. In this major upgrade, Mega has been optimized for use on 64-bit computing systems for analyzing larger datasets. Researchers can now explore and analyze tens of thousands of sequences in Mega The new version also provides an advanced wizard for building timetrees and includes a new functionality to automatically predict gene duplication events in gene family trees. The 64-bit Mega is made available in two interfaces: graphical and command line. The graphical user interface (GUI) is a native Microsoft Windows application that can also be used on Mac OS X. The command line Mega is available as native applications for Windows, Linux, and Mac OS X. They are intended for use in high-throughput and scripted analysis. Both versions are available from www.megasoftware.net free of charge.

Fredrik Ronquist, Maxim Teslenko, Paul van der Mark … (2012)
Since its introduction in 2001, MrBayes has grown in popularity as a software package for Bayesian phylogenetic inference using Markov chain Monte Carlo (MCMC) methods. With this note, we announce the release of version 3.2, a major upgrade to the latest official release presented in 2003. The new version provides convergence diagnostics and allows multiple analyses to be run in parallel with convergence progress monitored on the fly. The introduction of new proposals and automatic optimization of tuning parameters has improved convergence for many problems. The new version also sports significantly faster likelihood calculations through streaming single-instruction-multiple-data extensions (SSE) and support of the BEAGLE library, allowing likelihood calculations to be delegated to graphics processing units (GPUs) on compatible hardware. Speedup factors range from around 2 with SSE code to more than 50 with BEAGLE for codon problems. Checkpointing across all models allows long runs to be completed even when an analysis is prematurely terminated. New models include relaxed clocks, dating, model averaging across time-reversible substitution models, and support for hard, negative, and partial (backbone) tree constraints. Inference of species trees from gene trees is supported by full incorporation of the Bayesian estimation of species trees (BEST) algorithms. Marginal model likelihoods for Bayes factor tests can be estimated accurately across the entire model space using the stepping stone method. The new version provides more output options than previously, including samples of ancestral states, site rates, site d N /d S rations, branch rates, and node dates. A wide range of statistics on tree parameters can also be output for visualization in FigTree and compatible software.