Diabetes in China: The challenge now 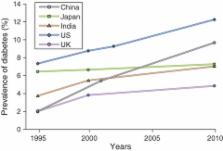 Prevalence of diabetes among men and women in China.

Weiping Jia,  Jiao-Jiang He,  Zhongyan Shan … (2010)
Because of the rapid change in lifestyle in China, there is concern that diabetes may become epidemic. We conducted a national study from June 2007 through May 2008 to estimate the prevalence of diabetes among Chinese adults. A nationally representative sample of 46,239 adults, 20 years of age or older, from 14 provinces and municipalities participated in the study. After an overnight fast, participants underwent an oral glucose-tolerance test, and fasting and 2-hour glucose levels were measured to identify undiagnosed diabetes and prediabetes (i.e., impaired fasting glucose or impaired glucose tolerance). Previously diagnosed diabetes was determined on the basis of self-report. The age-standardized prevalences of total diabetes (which included both previously diagnosed diabetes and previously undiagnosed diabetes) and prediabetes were 9.7% (10.6% among men and 8.8% among women) and 15.5% (16.1% among men and 14.9% among women), respectively, accounting for 92.4 million adults with diabetes (50.2 million men and 42.2 million women) and 148.2 million adults with prediabetes (76.1 million men and 72.1 million women). The prevalence of diabetes increased with increasing age (3.2%, 11.5%, and 20.4% among persons who were 20 to 39, 40 to 59, and > or = 60 years of age, respectively) and with increasing weight (4.5%, 7.6%, 12.8%, and 18.5% among persons with a body-mass index [the weight in kilograms divided by the square of the height in meters] of or = 30.0, respectively). The prevalence of diabetes was higher among urban residents than among rural residents (11.4% vs. 8.2%). The prevalence of isolated impaired glucose tolerance was higher than that of isolated impaired fasting glucose (11.0% vs. 3.2% among men and 10.9% vs. 2.2% among women). These results indicate that diabetes has become a major public health problem in China and that strategies aimed at the prevention and treatment of diabetes are needed. 2010 Massachusetts Medical Society

Yun-Nan Hu,  Zuojie Luo,  Jing-Xian Shen … (2008)
Early intensive insulin therapy in patients with newly diagnosed type 2 diabetes might improve beta-cell function and result in extended glycaemic remissions. We did a multicentre, randomised trial to compare the effects of transient intensive insulin therapy (continuous subcutaneous insulin infusion [CSII] or multiple daily insulin injections [MDI]) with oral hypoglycaemic agents on beta-cell function and diabetes remission rate. 382 patients, aged 25-70 years, were enrolled from nine centres in China between September, 2004, and October, 2006. The patients, with fasting plasma glucose of 7.0-16.7 mmol/L, were randomly assigned to therapy with insulin (CSII or MDI) or oral hypoglycaemic agents for initial rapid correction of hyperglycaemia. Treatment was stopped after normoglycaemia was maintained for 2 weeks. Patients were then followed-up on diet and exercise alone. Intravenous glucose tolerance tests were done and blood glucose, insulin, and proinsulin were measured before and after therapy withdrawal and at 1-year follow-up. Primary endpoint was time of glycaemic remission and remission rate at 1 year after short-term intensive therapy. Analysis was per protocol. This study was registered with ClinicalTrials.gov, number NCT00147836. More patients achieved target glycaemic control in the insulin groups (97.1% [133 of 137] in CSII and 95.2% [118 of 124] in MDI) in less time (4.0 days [SD 2.5] in CSII and 5.6 days [SD 3.8] in MDI) than those treated with oral hypoglycaemic agents (83.5% [101 of 121] and 9.3 days [SD 5.3]). Remission rates after 1 year were significantly higher in the insulin groups (51.1% in CSII and 44.9% in MDI) than in the oral hypoglycaemic agents group (26.7%; p=0.0012). beta-cell function represented by HOMA B and acute insulin response improved significantly after intensive interventions. The increase in acute insulin response was sustained in the insulin groups but significantly declined in the oral hypoglycaemic agents group at 1 year in all patients in the remission group. Early intensive insulin therapy in patients with newly diagnosed type 2 diabetes has favourable outcomes on recovery and maintenance of beta-cell function and protracted glycaemic remission compared with treatment with oral hypoglycaemic agents.