Divide and conquer: A perspective on biochips for single-cell and rare-molecule analysis by next-generation sequencing 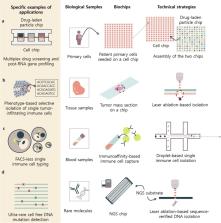 Recent advances in biochip technologies that connect next-generation sequencing (NGS) to real-world problems have facilitated breakthroughs in science and medicine. Because biochip technologies are themselves used in sequencing technologies, the main strengths of biochips lie in their scalability and throughput. Through the advantages of biochips, NGS has facilitated groundbreaking scientific discoveries and technical breakthroughs in medicine. However, all current NGS platforms require nucleic acids to be prepared in a certain range of concentrations, making it difficult to analyze biological systems of interest. In particular, many of the most interesting questions in biology and medicine, including single-cell and rare-molecule analysis, require strategic preparation of biological samples in order to be answered. Answering these questions is important because each cell is different and exists in a complex biological system. Therefore, biochip platforms for single-cell or rare-molecule analyses by NGS, which allow convenient preparation of nucleic acids from biological systems, have been developed. Utilizing the advantages of miniaturizing reaction volumes of biological samples, biochip technologies have been applied to diverse fields, from single-cell analysis to liquid biopsy. From this perspective, here, we first review current state-of-the-art biochip technologies, divided into two broad categories: microfluidic- and micromanipulation-based methods. Then, we provide insights into how future biochip systems will aid some of the most important biological and medical applications that require NGS. Based on current and future biochip technologies, we envision that NGS will come ever closer to solving more real-world scientific and medical problems.

Sequencing technologies - the next generation.

Michael Metzker (2010)
Demand has never been greater for revolutionary technologies that deliver fast, inexpensive and accurate genome information. This challenge has catalysed the development of next-generation sequencing (NGS) technologies. The inexpensive production of large volumes of sequence data is the primary advantage over conventional methods. Here, I present a technical review of template preparation, sequencing and imaging, genome alignment and assembly approaches, and recent advances in current and near-term commercially available NGS instruments. I also outline the broad range of applications for NGS technologies, in addition to providing guidelines for platform selection to address biological questions of interest.

Contributions: A. C. Lee and Y. Lee contributed equally to this work.

[b) ] Author to whom correspondence should be addressed: skwon@ 123456snu.ac.kr

All article content, except where otherwise noted, is licensed under a Creative Commons Attribution (CC BY) license ( http://creativecommons.org/licenses/by/4.0/).