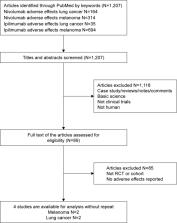 The aim of this study was to evaluate the risk of immune-related adverse events (irAEs) among cancer patients receiving nivolumab-plus-ipilimumab therapy and nivolumab monotherapy.

A total of 2,946 patients from four studies were included in the meta-analysis. The underlying malignancies included lung cancer (two trials) and melanoma (two trials). Compared with nivolumab monotherapy, the nivolumab-plus-ipilimumab therapy was associated with a significantly higher risk of all- and high-grade irAEs such as pruritus, rash, diarrhea, colitis, alanine aminotransferase elevation, and pneumonitis.

The combination therapy of nivolumab and ipilimumab increased the incidence of irAEs in patients with advanced cancer.

NK Damle,  JA Ledbetter,  M Urnes … (1991)
Functional interactions between T and B lymphocytes are necessary for optimal activation of an immune response. Recently, the T lymphocyte receptor CD28 was shown to bind the B7 counter-receptor on activated B lymphocytes, and subsequently to costimulate interleukin 2 production and T cell proliferation. CTLA-4 is a predicted membrane receptor from cytotoxic T cells that is homologous to CD28 and whose gene maps to the same chromosomal band as the gene for CD28. It is not known, however, if CD28 and CTLA-4 also share functional properties. To investigate functional properties of CTLA-4, we have produced a soluble genetic fusion between the extracellular domain of CTLA-4 and an immunoglobulin C gamma chain. Here, we show that the fusion protein encoded by this construct, CTLA4Ig, bound specifically to B7-transfected Chinese hamster ovary cells and to lymphoblastoid cells. CTLA4Ig also immunoprecipitated B7 from cell surface 125I-labeled extracts of these cells. The avidity of 125I-labeled B7Ig fusion protein for immobilized CTLA4Ig was estimated (Kd approximately 12 nM). Finally, we show that CTLA4Ig was a potent inhibitor of in vitro immune responses dependent upon cellular interactions between T and B lymphocytes. These findings provide direct evidence that, like its structural homologue CD28, CTLA- 4 is able to bind the B7 counter-receptor on activated B cells. Lymphocyte interactions involving the B7 counter-receptor are functionally important for alloantigen responses in vitro.

The PD1:PD-L1/2 Pathway from Discovery to Clinical Implementation

Kankana Bardhan,  Theodora Anagnostou,  Vassiliki Boussiotis (2016)
The immune system maintains a critically organized network to defend against foreign particles, while evading self-reactivity simultaneously. T lymphocytes function as effectors and play an important regulatory role to orchestrate the immune signals. Although central tolerance mechanism results in the removal of the most of the autoreactive T cells during thymic selection, a fraction of self-reactive lymphocytes escapes to the periphery and pose a threat to cause autoimmunity. The immune system evolved various mechanisms to constrain such autoreactive T cells and maintain peripheral tolerance, including T cell anergy, deletion, and suppression by regulatory T cells (TRegs). These effects are regulated by a complex network of stimulatory and inhibitory receptors expressed on T cells and their ligands, which deliver cell-to-cell signals that dictate the outcome of T cell encountering with cognate antigens. Among the inhibitory immune mediators, the pathway consisting of the programed cell death 1 (PD-1) receptor (CD279) and its ligands PD-L1 (B7-H1, CD274) and PD-L2 (B7-DC, CD273) plays an important role in the induction and maintenance of peripheral tolerance and for the maintenance of the stability and the integrity of T cells. However, the PD-1:PD-L1/L2 pathway also mediates potent inhibitory signals to hinder the proliferation and function of T effector cells and have inimical effects on antiviral and antitumor immunity. Therapeutic targeting of this pathway has resulted in successful enhancement of T cell immunity against viral pathogens and tumors. Here, we will provide a brief overview on the properties of the components of the PD-1 pathway, the signaling events regulated by PD-1 engagement, and their consequences on the function of T effector cells.