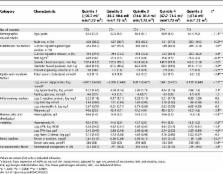 End-stage chronic kidney disease is associated with striking excesses of cardiovascular mortality, but it is uncertain to what extent renal function is related to risk of subsequent coronary heart disease (CHD) in apparently healthy adults. This study aims to quantify the association of markers of renal function with CHD risk in essentially general populations.

Estimated glomerular filtration rate (eGFR) was calculated using standard prediction equations based on serum creatinine measurements made in 2,007 patients diagnosed with nonfatal myocardial infarction or coronary death during follow-up and in 3,869 people without CHD in the Reykjavik population-based cohort of 18,569 individuals. There were small and nonsignificant odds ratios (ORs) for CHD risk over most of the range in eGFR, except in the lowest category of the lowest fifth (corresponding to values of <60 ml/min/1.73m 2), in which the OR was 1.33 (95% confidence interval 1.01–1.75) after adjustment for several established cardiovascular risk factors. Findings from the Reykjavik study were reinforced by a meta-analysis of six previous reports (identified in electronic and other databases) involving a total of 4,720 incident CHD cases (including Reykjavik), which yielded a combined risk ratio of 1.41 (95% confidence interval 1.19–1.68) in individuals with baseline eGFR less than 60 ml/min/1.73m 2 compared with those with higher values.

Although there are no strong associations between lower-than-average eGFR and CHD risk in apparently healthy adults over most of the range in renal function, there may be a moderate increase in CHD risk associated with very low eGFR (i.e., renal dysfunction) in the general population. These findings could have implications for the further understanding of CHD and targeting cardioprotective interventions.

John Danesh and colleagues conclude there may be a moderate increase in risk of coronary heart disease associated with very low estimated glomerular filtration rate.

Coronary heart disease (CHD), the leading cause of death in most Western countries, is a “cardiovascular” disease—literally a disorder affecting the heart and/or blood vessels. In CHD, the blood vessels that supply the heart become increasingly narrow. Eventually, the flow of blood to the heart slows or stops, causing chest pains (angina), breathlessness, and heart attacks. Many factors increase the risk of developing CHD and other cardiovascular diseases, including high blood pressure, high blood levels of cholesterol (a type of fat), or being overweight. Individuals can reduce their chances of developing cardiovascular disease by taking drugs to reduce their blood pressure or cholesterol levels or by making lifestyle changes (so-called cardioprotective interventions). Another important risk factor for cardiovascular disease is end-stage chronic kidney disease (CKD), a condition in which the kidneys stop working. (In healthy people, the kidneys remove waste products and excess fluid from the body.) People with end-stage CKD (which is treated by dialysis) have about a five times higher risk of dying from cardiovascular disease compared with healthy people.

End-stage CKD is preceded by a gradual loss of kidney function. There is a clear association between non-dialysis–dependent CKD and the incidence of cardiovascular events (such as heart attacks) in people who already have signs of cardiovascular disease. But are people with slightly dysfunctional kidneys (often because of increasing age) but without any obvious cardiovascular disease at greater risk of developing cardiovascular diseases than people with fully functional kidneys? If the answer is yes, it might be possible to reduce CHD deaths by minimizing the exposure of people with CKD to other risk factors for cardiovascular disease. In this study, the researchers have taken two approaches to answer this question. In a population-based study, they have examined whether there is any association in healthy adults between kidney function measured at the start of the study and incident CHD (the first occurrence of CHD) over subsequent years. In addition, they have systematically searched the published literature for similar studies and combined the results of these studies using statistical methods, a so-called “meta-analysis.”

Between 1967 and 1991, nearly 19,000 middle-aged men and women without a history of heart attacks living in Reykjavik, Iceland, enrolled in a prospective study of cardiovascular disease. Baseline blood samples were taken at enrollment and the participants' health monitored for 20 years on average. The researchers identified 2,007 participants who suffered a nonfatal heart attack or died of CHD during follow-up and 3,869 who remained disease free. They then calculated the estimated glomerular filtration rate (eGFR; a measure of kidney function) for each participant from baseline creatinine measurements (creatinine is a muscle waste product). There was no association between lower-than-average eGFRs and the risk of developing CHD over most of the range of eGFR values. However, people whose eGFR was below approximately 60 units had about a 40% higher risk of developing CHD after allowing for established cardiovascular risk factors than individuals with higher eGFRs. This finding was confirmed by the meta-analysis of six previous studies, which included a further 2,700 incident CHD cases.

These findings indicate that people with an eGFR below about 60 units (the cut-off used to define CKD) may have an increased risk of developing CHD. They also indicate a nonliner association between kidney function and CHD risk. That is, any association with CHD became evident only when the eGFR dropped below about 60 units. These findings need confirming in different ethnic groups and by using more accurate methods to measure eGFRs. Nevertheless, they suggest that improving kidney function across the board is unlikely to have much effect on the overall incidence of CHD. Instead, they suggest that targeting cardioprotective interventions at the one in ten adults in Western countries whose eGFR is below 60 units might be a good way to reduce the burden of CHD.

Finlay McAlister,  Marcello Tonelli,  C Rabbat … (2006)
Current guidelines identify people with chronic kidney disease (CKD) as being at high risk for cardiovascular and all-cause mortality. Because as many as 19 million Americans may have CKD, a comprehensive summary of this risk would be potentially useful for planning public health policy. A systematic review of the association between non-dialysis-dependent CKD and the risk for all-cause and cardiovascular mortality was conducted. Patient- and study-related characteristics that influenced the magnitude of these associations also were investigated. MEDLINE and EMBASE databases were searched, and reference lists through December 2004 were consulted. Authors of 10 primary studies provided additional data. Cohort studies or cohort analyses of randomized, controlled trials that compared mortality between those with and without chronically reduced kidney function were included. Studies were excluded from review when participants were followed for < 1 yr or had ESRD. Two reviewers independently extracted data on study setting, quality, participant and renal function characteristics, and outcomes. Thirty-nine studies that followed a total of 1,371,990 participants were reviewed. The unadjusted relative risk for mortality in participants with reduced kidney function compared with those without ranged from 0.94 to 5.0 and was significantly more than 1.0 in 93% of cohorts. Among the 16 studies that provided suitable data, the absolute risk for death increased exponentially with decreasing renal function. Fourteen cohorts described the risk for mortality from reduced kidney function, after adjustment for other established risk factors. Although adjusted relative hazards were consistently lower than unadjusted relative risks (median reduction 17%), they remained significantly more than 1.0 in 71% of cohorts. This review supports current guidelines that identify individuals with CKD as being at high risk for cardiovascular mortality. Determining which interventions best offset this risk remains a health priority.

Relation between renal dysfunction and cardiovascular outcomes after myocardial infarction.

André-Jean Rouleau,  Lars Køber,  E. Sánchez-Velázquez … (2004)
The presence of coexisting conditions has a substantial effect on the outcome of acute myocardial infarction. Renal failure is associated with one of the highest risks, but the influence of milder degrees of renal impairment is less well defined. As part of the Valsartan in Acute Myocardial Infarction Trial (VALIANT), we identified 14,527 patients with acute myocardial infarction complicated by clinical or radiologic signs of heart failure, left ventricular dysfunction, or both, and a documented serum creatinine measurement. Patients were randomly assigned to receive captopril, valsartan, or both. The glomerular filtration rate (GFR) was estimated by means of the four-component Modification of Diet in Renal Disease equation, and the patients were grouped according to their estimated GFR. We used a 70-candidate variable model to adjust and compare overall mortality and composite cardiovascular events among four GFR groups. The distribution of estimated GFR was wide and normally shaped, with a mean (+/-SD) value of 70+/-21 ml per minute per 1.73 m2 of body-surface area. The prevalence of coexisting risk factors, prior cardiovascular disease, and a Killip class of more than I was greatest among patients with a reduced estimated GFR (less than 45.0 ml per minute per 1.73 m2), and the use of aspirin, beta-blockers, statins, or coronary-revascularization procedures was lowest in this group. The risk of death or the composite end point of death from cardiovascular causes, reinfarction, congestive heart failure, stroke, or resuscitation after cardiac arrest increased with declining estimated GFRs. Although the rate of renal events increased with declining estimated GFRs, the adverse outcomes were predominantly cardiovascular. Below 81.0 ml per minute per 1.73 m2, each reduction of the estimated GFR by 10 units was associated with a hazard ratio for death and nonfatal cardiovascular outcomes of 1.10 (95 percent confidence interval, 1.08 to 1.12), which was independent of the treatment assignment. Even mild renal disease, as assessed by the estimated GFR, should be considered a major risk factor for cardiovascular complications after a myocardial infarction. Copyright 2004 Massachusetts Medical Society