Molecular, Cellular and Circuit Basis of Cholinergic Modulation of Pain 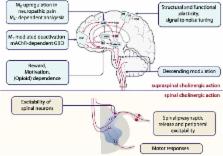 In addition to being a key component of the autonomic nervous system, acetylcholine acts as a prominent neurotransmitter and neuromodulator upon release from key groups of cholinergic projection neurons and interneurons distributed across the central nervous system. It has been more than forty years since it was discovered that cholinergic transmission profoundly modifies the perception of pain. Directly activating cholinergic receptors or extending the action of endogenous acetylcholine via pharmacological blockade of acetylcholine esterase reduces pain in rodents as well as humans; conversely, inhibition of muscarinic cholinergic receptors induces nociceptive hypersensitivity. Here, we aim to review the considerable progress in our understanding of peripheral, spinal and brain contributions to cholinergic modulation of pain.

We discuss the distribution of cholinergic neurons, muscarinic and nicotinic receptors over the central nervous system and the synaptic and circuit-level modulation by cholinergic signaling. AchRs profoundly regulate nociceptive transmission at the level of the spinal cord via pre- as well as postsynaptic mechanisms. Moreover, we attempt to provide an overview of how some of the salient regions in the pain network spanning the brain, such as the primary somatosensory cortex, insular cortex, anterior cingulate cortex, the medial prefrontal cortex and descending modulatory systems are influenced by cholinergic modulation.

Finally, we critically discuss the clinical relevance of cholinergic signaling to pain therapy. Cholinergic mechanisms contribute to several both conventional as well as unorthodox forms of pain treatments, and reciprocal interactions between cholinergic and opioidergic modulation impact on the function and efficacy of both opioids and cholinomimetic drugs.

Graeme Rogers,  Edna Pereira,  Rodrigo Albuquerque … (2008)
The classical studies of nicotine by Langley at the turn of the 20th century introduced the concept of a "receptive substance," from which the idea of a "receptor" came to light. Subsequent studies aided by the Torpedo electric organ, a rich source of muscle-type nicotinic receptors (nAChRs), and the discovery of alpha-bungarotoxin, a snake toxin that binds pseudo-irreversibly to the muscle nAChR, resulted in the muscle nAChR being the best characterized ligand-gated ion channel hitherto. With the advancement of functional and genetic studies in the late 1980s, the existence of nAChRs in the mammalian brain was confirmed and the realization that the numerous nAChR subtypes contribute to the psychoactive properties of nicotine and other drugs of abuse and to the neuropathology of various diseases, including Alzheimer's, Parkinson's, and schizophrenia, has since emerged. This review provides a comprehensive overview of these findings and the more recent revelations of the impact that the rich diversity in function and expression of this receptor family has on neuronal and nonneuronal cells throughout the body. Despite these numerous developments, our understanding of the contributions of specific neuronal nAChR subtypes to the many facets of physiology throughout the body remains in its infancy.

Yann Mineur,  Marina Picciotto,  M Higley (2012)
Acetylcholine in the brain alters neuronal excitability, influences synaptic transmission, induces synaptic plasticity, and coordinates firing of groups of neurons. As a result, it changes the state of neuronal networks throughout the brain and modifies their response to internal and external inputs: the classical role of a neuromodulator. Here, we identify actions of cholinergic signaling on cellular and synaptic properties of neurons in several brain areas and discuss consequences of this signaling on behaviors related to drug abuse, attention, food intake, and affect. The diverse effects of acetylcholine depend on site of release, receptor subtypes, and target neuronal population; however, a common theme is that acetylcholine potentiates behaviors that are adaptive to environmental stimuli and decreases responses to ongoing stimuli that do not require immediate action. The ability of acetylcholine to coordinate the response of neuronal networks in many brain areas makes cholinergic modulation an essential mechanism underlying complex behaviors. Copyright © 2012 Elsevier Inc. All rights reserved.

The amygdala and persistent pain.

Diana S. Han,  Gregory Bird,  Weidong Li … (2004)
A reciprocal relationship exists between persistent pain and negative affective states such as fear, anxiety, and depression. Accumulating evidence points to the amygdala as an important site of such interaction. Whereas a key role of the amygdala in the neuronal mechanisms of emotionality and affective disorders has been well established, the concept of the amygdala as an important contributor to pain and its emotional component is still emerging. This article will review and discuss evidence from anatomical, neuroimaging, behavioral, electrophysiological, pharmacological, and biochemical data that implicate the amygdala in pain modulation and emotional responses to pain. The latero-capsular division of the central nucleus of the amygdala is now defined as the "nociceptive amygdala" and integrates nociceptive information with poly-modal information about the internal and external bodily environment. Dependent on environmental conditions and affective states, the amygdala appears to play a dual facilitatory and inhibitory role in the modulation of pain behavior and nociceptive processing at different levels of the pain neuraxis. Only recently, electrophysiological, pharmacological, and biochemical neuroplastic changes were shown in the nociceptive amygdala in persistent pain. It is conceivable, however, that amygdala plasticity plays an important role in emotional pain behavior and its modulation by affective state.