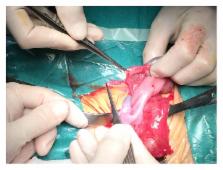 Congenital colonic stenosis is a rare pediatric condition. Since 1968, only 16 cases have been reported in the literature. To the authors' knowledge, multiple congenital colonic stenosis has not been previously reported in the literature. We report the case of a 2-month-old male, presented at our Neonatal Intensive Care Unit with a suspicion of intestinal malrotation. Clinical examination revealed persistent abdominal distension. During the enema examination, the contrast medium appeared to fill the lumen of the colon up to three stenotic segments and could not proceed further. Intraoperatively we confirmed the presence of four types of colonic atresia, located in the ascending, transverse, and descending colon, respectively, plus appendix atresia. First surgical steps consisted in resection of proximal stenotic segment, appendix removal, proximal cecostomy, and distal colostomy on ascending colon in order to preserve colonic length. Histopathological examination confirmed the diagnosis of colonic stenosis. Final surgical step consisted in multiple colocolostomy and enteroplasty. A planned two-stage procedure, consisting of resection with colostomy for decompression as the first step and a later anastomosis, is recommended in order to allow bowel length preservation.

Intestinal atresia and stenosis: a 25-year experience with 277 cases.

J Grosfeld, Randy Scherer, Cristiane L. Dalla Corte … (1998)
To evaluate the causes, clinical presentation, diagnosis, operative management, postoperative care, and outcome in infants with intestinal atresia. Retrospective case series. Pediatric tertiary care teaching hospital. A population-based sample of 277 neonates with intestinal atresia and stenosis treated from July 1, 1972, through April 30, 1997. The level of obstruction was duodenal in 138 infants, jejunoileal in 128, and colonic in 21. Of the 277 neonates, 10 had obstruction in more than 1 site. Duodenal atresia was associated with prematurity (46%), maternal polyhydramnios (33%), Down syndrome (24%), annular pancreas (33%), and malrotation (28%). Jejunoileal atresia was associated with intrauterine volvulus, (27%), gastroschisis (16%), and meconium ileus (11.7%). Patients with duodenal obstruction were treated by duodenoduodenostomy in 119 (86%), of 138 patients duodenotomy with web excision in 9 (7%), and duodenojejunostomy in 7 (5%) A duodenostomy tube was placed in 3 critically ill neonates. Patients with jejunoileal atresia were treated with resection in 97 (76%) of 128 patients (anastomosis, 45 [46%]; tapering enteroplasty, 23 [24%]; or temporary ostomy, 29 [30%]), ostomy alone in 25 (20%), web excision in 5 (4%), and the Bianchi procedure in 1 (0.8%). Patients with colon atresia were managed with initial ostomy and delayed anastomosis in 18 (86%) of 21 patients and resection with primary anastomosis in 3 (14%). Short-bowel syndrome was noted in 32 neonates. Morbidity and early and late mortality. Operative mortality for neonates with duodenal atresia was 4%, with jejunoileal atresia, 0.8%, and with colonic atresia, 0%. The long-term survival rate for children with duodenal atresia was 86%; with jejunoileal atresia, 84%; and with colon atresia, 100%. The Bianchi procedure (1 patient, 0.8%) and growth hormone, glutamine, and modified diet (4 patients, 1%) reduced total parenteral nutrition dependence. Cardiac anomalies (with duodenal atresia) and ultrashort-bowel syndrome (<40 cm) requiring long-term total parenteral nutrition, which can be complicated by liver disease (with jejunoileal atresia), are the major causes of morbidity and mortality in these patients. Use of growth factors to enhance adaptation and advances in small bowel transplantation may improve long-term outcomes.

Association of vasoconstrictive exposures with risks of gastroschisis and small intestinal atresia.

The Surgery of Infancy and Childhood