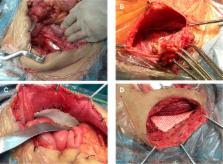 We report a case of cecal cancer with invasion of the abdominal wall and right inguinal lymph node metastasis. This patient had undergone an appendectomy 2 years previously. He underwent extensive radical right hemicolectomy with anastomosis and tension-free repair of the damaged right lower abdominal wall. The surgery progressed successfully, and the vital signs of the patient were stable (approximately 200 mL blood loss). Postoperative diagnosis revealed moderately to poorly differentiated adenocarcinoma of the cecum with invasion of the abdominal wall and metastasis of the inguinal lymph nodes (pT4bN2bM1, IV4a). The patient has remained well post-surgery.

Masayasu Hara,  Hiroki Takahashi,  Mikinori Sato … (2013)
We herein report the case of a curatively resected solitary inguinal lymph node metastasis from cecum cancer. Our patient was a 67-year-old male with cecum cancer with abdominal wall invasion. Three years after surgery, inguinal lymph node swelling was detected by a computed tomography examination. Further examination revealed no other metastases. Surgical resection was performed to remove the lesion, and microscopic examination revealed that cancer cells had metastasized. No recurrence was detected 3 years after the salvage surgery. Inguinal lymph node metastasis of cecum cancer has not been reported in the literature, but in our case salvage surgery resulted in a good outcome.

Prognostic significance of abdominal wall involvement in carcinoma of cecum.

Colon cancer presenting as an appendiceal abscess in a young patient.